My Twice Smoked Ham with Brown Sugar Honey Glaze is a backyard twist on that holiday classic. An extra kiss of hardwood smoke adds so much flavor to a spiral cut ham and the glaze is almost like a sweet and savory shiny candy coating to tie everything together! 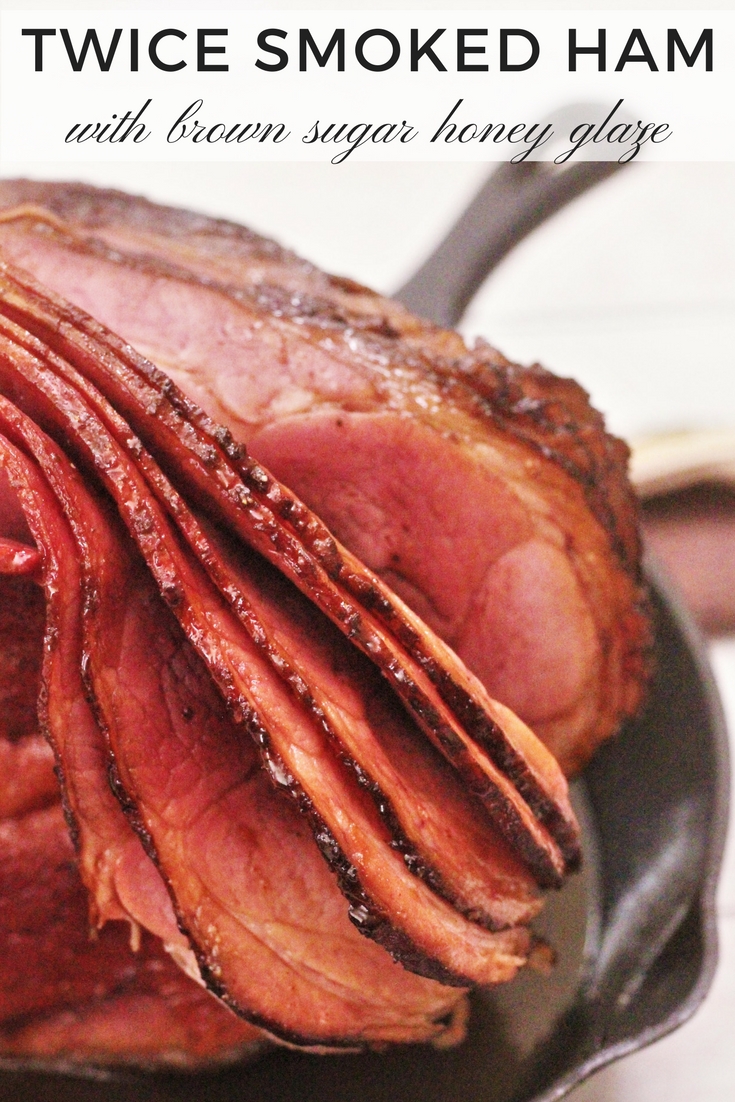 What is a Smoked Ham?

All pork products that you purchase that are labeled “ham” have been cured with a nitrate curing solution to give them their characteristic pink color and awesomely tender texture. They are all also pre-smoked, and you’ll often see them labeled as apple or hickory wood smoked. This wood smoke will be indicative of the smoke flavor your ham will have. Hickory typically has a stronger smoke flavor than apple. 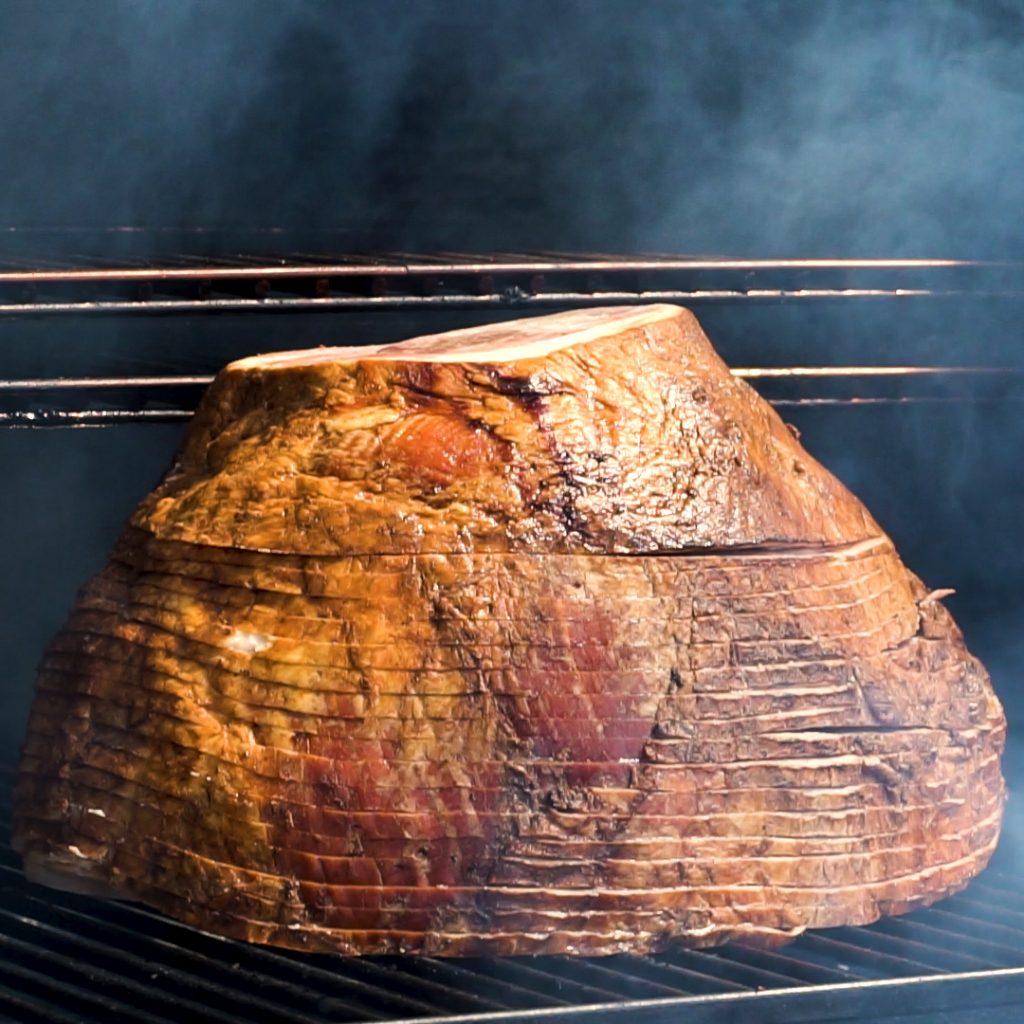 Why is this called Twice Smoked Ham?

Since ham is pre-cured and smoked, what we are making is called a twice smoked or double smoked ham. I have had some readers concerned that twice smoking a ham will cause it to taste overly smoky, but I’ve never found that to be the case. The process for this recipe is designed to add just the right amount of smoke flavor, and then pump up the moisture content in the ham itself and create a delicious crust on the outside edges of the ham. 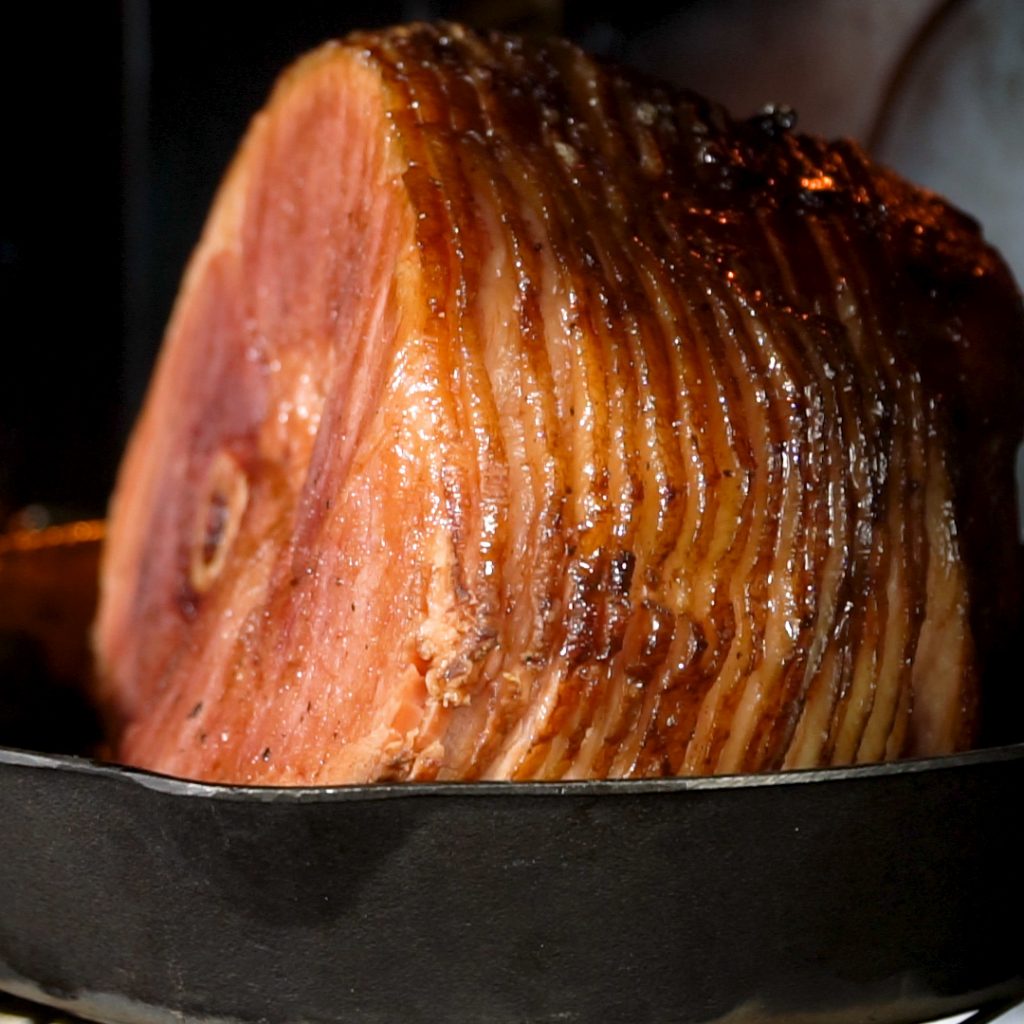 Sometimes it is super nice to have a list of ingredients at a glance, so you can make sure you have everything you need before you get started. Most of the ingredients for this recipe are pantry staples and might already be in your cupboard and ready to go!

As far as equipment needed for this recipe, I tried to keep things pretty simple. I’ll include links to any items I have that you may want to add to your kitchen cabinets, but you should be able to make this ham without needing any super specialty equiment.

How to Cook Twice Smoked Ham

Now that you know what you’re cooking and the ingredients and equipment you’ll need to have on hand, let’s walk through the steps. 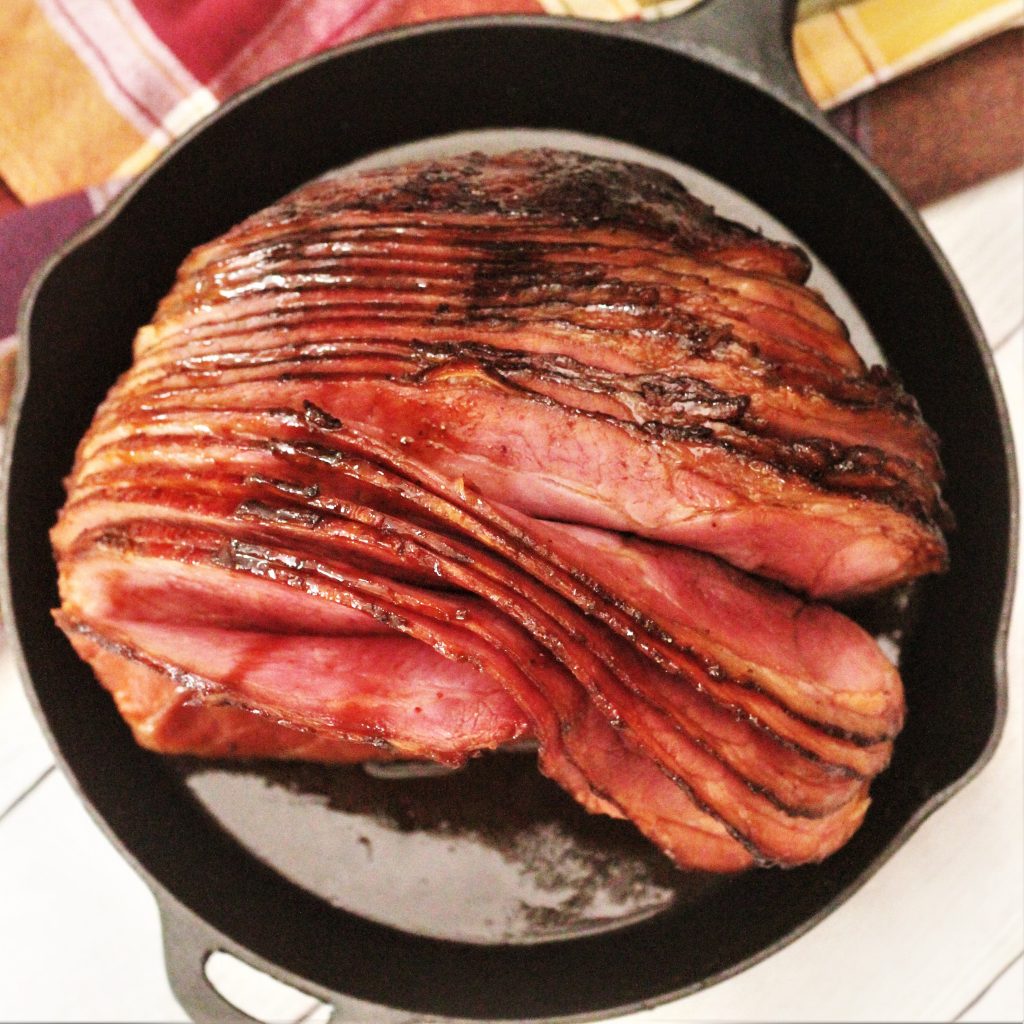 Most people make this twice smoked ham for holidays and other special family gatherings. I know how important it is to get those family meals just right. They are so special and create so many great memories. I’m here to help you get this ham right the first time by answering some FAQ’s that I see in the comments section. If your questions isn’t answered in here, feel free to leave a comment below and I’m happy to help you out!

What type of ham should I buy?

This recipe was developed for a spiral, sliced, pre-smoked ham that weighs about 8 pounds. This is the most common type and size of ham available in grocery stores.

The cook times in the recipe were created around an 8 pound ham. If your ham weighs more or less, the total time will likely change during step number 4 in the recipe below. Smaller hams will reach 140 degrees F in less time and larger hams will take longer. A 10-12 pound ham will need 2.5-3 hours in the braising step. This is why a meat thermometer is a useful piece of equipment for this recipe, as you can check your progress often.

Can I use a non-spiral sliced ham?

You can absolutely use a non-spiral sliced ham for this recipe. The time and temperature guidelines in the recipe should follow pretty similarly for a non-sliced ham, but it may take a little bit longer to come up to temperature without the slices in the ham.

Can I cook a twice smoked ham in my oven?

The process for this ham is the same, whether you cook this ham in the oven or outside on your smoker. However, it won’t be a twice smoked ham and you’ll be missing out on some of the extra smoky flavor you get during the first phase of the recipe.

If using your oven, just follow the time and temperature guidelines written in the printable recipe below.

What can I use instead of chicken stock in the braise?

There are a lot of options instead of chicken stock in the braise, it just depends on your flavor preferences. I’ve heard of people using apple juice, beer, hard cider, white wine, bourbon, and soda. Lots of creative options to add specific and unique flavors to their hams.

What if I don’t have a cast iron pan?

A cast iron pan is awesome in this recipe for the ease of transitioning the ham from the smoker to the oven. If you don’t have a cast iron pan, you can use a disposable aluminum baking pan, just be cautious when moving it off of the smoker to the oven. The ham is heavy and there will be a lot of liquid in the pan. Transfer the pan to a rimmed baking sheet if possible to avoid the aluminum pan from folding up on you and spilling hot ham liquid everywhere.

Can I use a different glaze (or the glaze packet that came with the ham?)

Absolutely!! The glaze recipe that comes with this ham is a delicious brown sugar and honey glaze, but if you have a favorite glaze… feel free to use it! I have a couple of other glazed ham recipes also that you may want to check out if you like to experiment with your ham glaze flavors:

Can I make a gravy using the braising liquid?

Side Dishes to Serve with Twice Smoked Ham 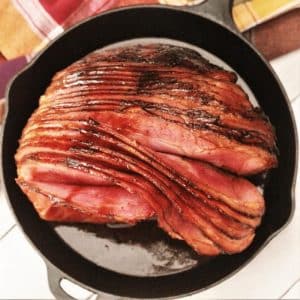 Susie Bulloch (heygrillhey.com)
My Twice Smoked Ham with Brown Sugar Honey Glaze is a backyard twist on that holiday classic. An extra kiss of hardwood smoke adds so much flavor to a spiral cut ham and the glaze is almost like a sweet and savory shiny candy coating to tie everything together!
4.88 from 25 votes
Prep Time : 10 mins
Cook Time : 4 hrs
Total Time : 4 hrs 10 mins
Servings : 15 people
Calories : 84kcal
Print Recipe Save to Pinterest

**This recipe was originally published in March, 2018. It has since been updated with an FAQ section and other helpful notes, but the recipe remains the same**