This Double Smoked Ham post is sponsored by Camp Chef. I smoked this ham on my Camp Chef Woodwind. You can read my full review of that product HERE.

I’ve gotta tell you friends, there isn’t much I love more than a crispy, sugary crust on a spiral ham. It reminds me of family holiday gatherings and my Mom’s leftover bean and ham hock soup. Smoked ham is the perfect answer to feeding a crowd and it is incredibly simple to prepare, so I thought I’d put my own smoky twist on the family ham for the holidays this year.

How to Smoke a Ham

Since all hams are already cured and smoked, putting it back in the smoker essentially creates a double smoked ham. YUM! To smoke a ham, preheat your smoker to 250 degrees F using a mild wood, I like apple, peach, or alder. Remember, it has already been smoked once, we don’t want too heavy of a smoke to overwhelm the flavor of the meat. Plan on about 20-25 minutes per pound at 250 degrees F to bring it up to proper serving temperature as well as infuse the meat with another layer of smoky flavor.

Since smoked hams are already pre-cooked you can run into problems with the ham drying out. To combat this, I place my hams on an elevated rack on top of a baking sheet and baste with a mixture of peach juice and bourbon throughout the smoking process. Any drippings will be caught by the baking sheet and help keep the ham moist by steaming it from underneath.

I think the little cherry on top of all smoked hams is that candy sweet glaze. The glaze on this ham may be the favorite of any glaze I’ve ever made, sweet from brown sugar, spiked with bourbon and peach juice, and seasoned with warm spices like ginger, cinnamon, nutmeg, and cloves. The real secret is getting that glaze to crisp up and caramelize on the exterior of the smoked ham. There are several ways to do this; you can increase the heat on your grill (anywhere above 400 degrees F), you can broil in your oven for a couple of minutes, or you can blast the outside with direct heat from a blow torch (which was the method I chose… because FIRE!)

Smoked Ham Recipes and Side Ideas 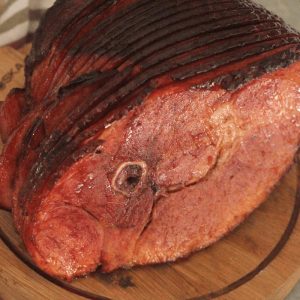