Grilled Pork Tenderloin is a weeknight dinner staple. The beer and mustard marinade becomes a glaze for the grilled pork tenderloin, and the flavors are out of this world! 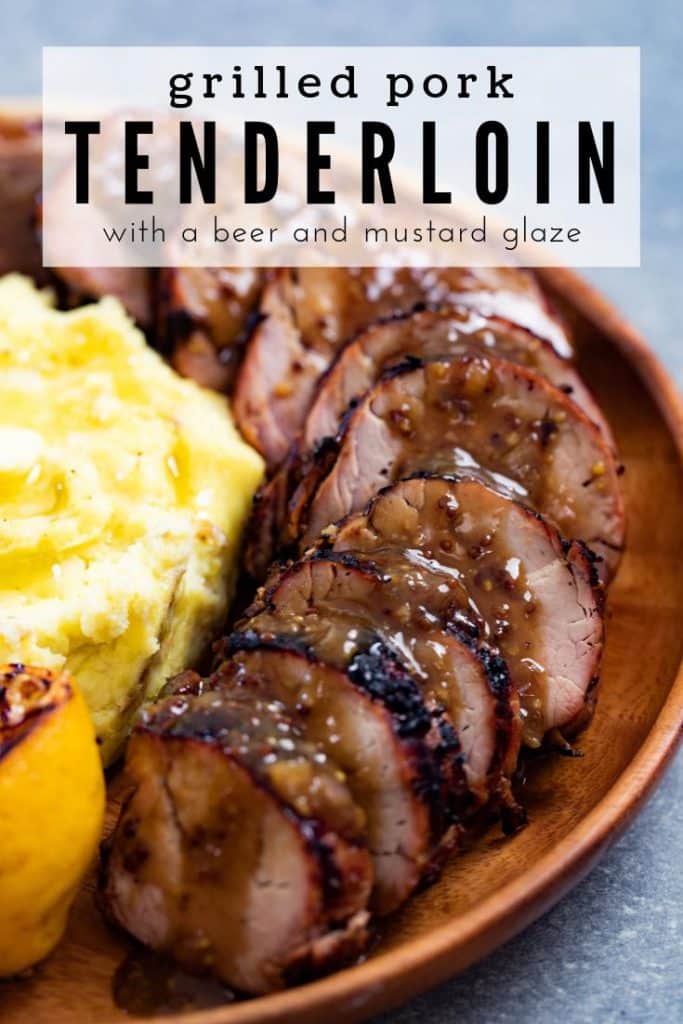 What is Pork Tenderloin?

Pork tenderloin is a long, thin cut of pork cut that runs along the backbone of the animal. Since these muscles are not used often, the tenderloin is an extremely tender cut of meat (hence the name). There is not a lot of intramuscular fat, which also means it has less of a strong “porky” flavor. Tenderloin has a lean, delicate flavor, and it is also very easy to cook.

For the perfect grilled pork tenderloin, I recommend using a marinade that can infuse flavor into the meat and monitoring temperature with an internal meat thermometer so it stays moist. Cooking tenderloin on the grill over high heat will add a gorgeous caramelized crust on the outside of your meat, and the marinade will keep it juicy on the inside.

Pork tenderloin is a thin cut of meat and cooks quickly, making it a great cut of pork to stick on the grill. Not only will it be ready in under 30 minutes, but the char from the grill will add a great flavor as well.

Since pork tenderloin has such a delicate flavor, it’s my go-to for fancier meals or date nights in with my spouse. Pair it with some smoked mashed potatoes and simple grilled asparagus, and you have a meal fit for a BBQ king. It’s also a great main course for weekday dinners when you’re short on time, but you want something that tastes like you got it from a fancy restaurant.

All good marinades have similar components: fat and acid for tenderness and flavor, as well as salt, sugar, and additional seasonings. This beer and mustard marinade has all of the right elements with a flavor profile that perfectly complements the pork. Here’s what you’ll need to snag from your pantry or the store to make this marinade:

After combining the ingredients for the marinade, I like to keep it in a zip top bag or covered bowl in the refrigerator. You can let your pork marinate for as little as an hour, or up to 8 hours for a stronger flavor profile.

How to Grill Pork Tenderloin

Grilling pork tenderloin is a really straightforward process because the meat is fairly uniform in size, and it cooks quickly. For this recipe, I like to grill my tenderloin hot and fast over Medium-High heat (400 degrees F). You can use direct heat for this recipe, meaning your flame or coals can be directly under the meat.

Here’s the step-by-step process for grilling delicious pork tenderloin (a list of ingredients and step-by-step instructions are available in the printable recipe at the bottom of this page):

How Long to Grill Pork Tenderloin

On a medium-high grill, plan for 8-12 minutes to grill your pork tenderloin. It really does cook quickly with direct heat, so it needs to be monitored closely. Place the marinated pork tenderloin on clean grill grates and rotate sides every 2-3 minutes until an internal meat thermometer reads 145 degrees F. Remove from the grill and tent with foil for 5-10 minutes while you finish making the beer and mustard glaze.

One quick tip as you’re grilling pork tenderloin: I recommend having a cool zone on your grill. That way, if your tenderloin is getting too dark on the outside and the interior isn’t finished yet, you can move it over to the cool side of the grill. Then you can close the lid and allow the tenderloin to finish cooking without adding more char to the exterior.

Pork tenderloin is one of my favorite things to cook on the grill. If you’re also a big fan, you’ve got to check out these other tasty recipes below: 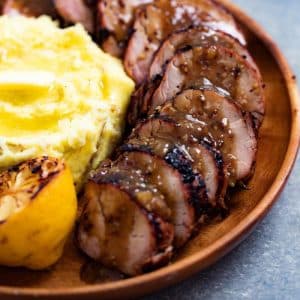 Susie Bulloch (heygrillhey.com)
This Grilled Pork Tenderloin is a weeknight dinner staple. The beer and mustard marinade becomes a glaze for the grilled pork tenderloin, and the flavors are out of this world!
5 from 9 votes
Prep Time : 15 mins
Cook Time : 15 mins
Marinating Time : 4 hrs
Total Time : 20 mins
Servings : 4 people
Calories : 574kcal
Print Recipe Save to Pinterest