This Stuffed Pork Tenderloin is packed with flavor from balsamic caramelized onions, crumbled bacon, Manchego cheese, and spinach. The whole thing is rolled up and grilled until the pork is juicy and the cheese is nice and melted. 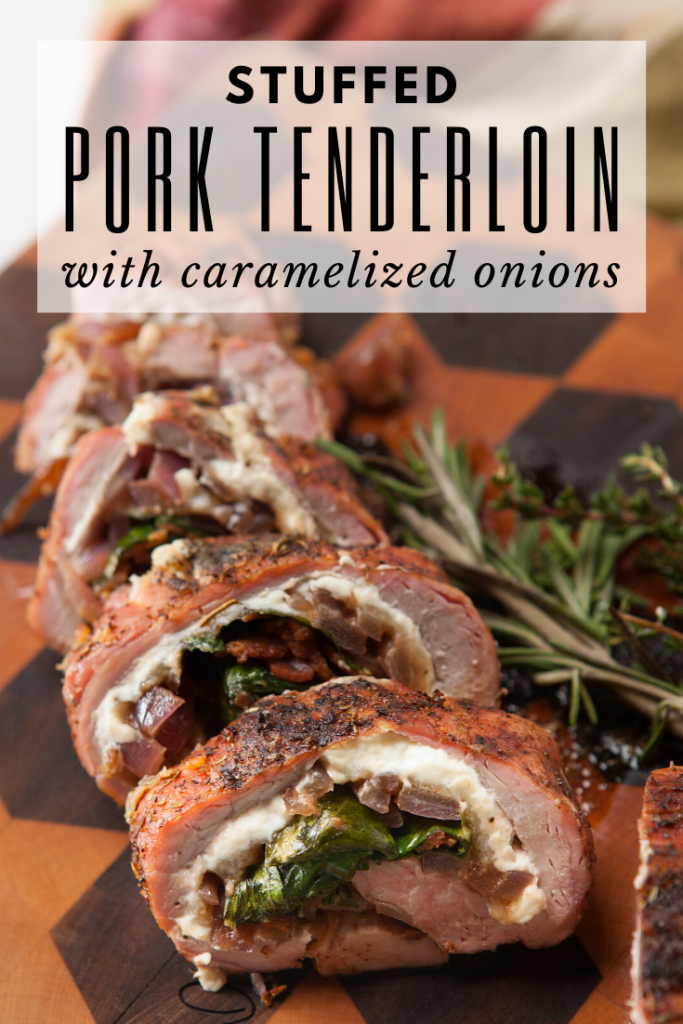 Stuffed Pork Tenderloin is an amazing way to amp up a simple cut of meat. Pork tenderloins are incredibly tender, since they are essentially the filet. Because there is very little fat in a tenderloin, it is perfect to stuff with all sorts of tasty things to bring in both moisture and flavor.

I sprinkled my stuffed pork tenderloin liberally with my Award-Winning Chicken Seasoning. This blend is bold with a little bit of heat, making it the perfect complement to the layers of flavor within the filling. The seasoning also allowed me to grill this particular pork tenderloin quickly over Medium-High heat (around 375 degrees F) and get a nice smoked flavor in under 30 minutes.

If you don’t have any of my Chicken Seasoning on hand, you can use this recipe for my Lemon Herb Chicken Seasoning. And for an additional layer of flavor, you could smoke the stuffed pork tenderloin at 225 degrees F for about an hour. It would be absolutely delicious!

How to Prepare Stuffed Pork Tenderloin

Making stuffed pork tenderloin takes a bit of extra time, but you’ll quickly see it was well worth the effort (just scroll below to the comments to see what other folks are saying about this amazing meal!). 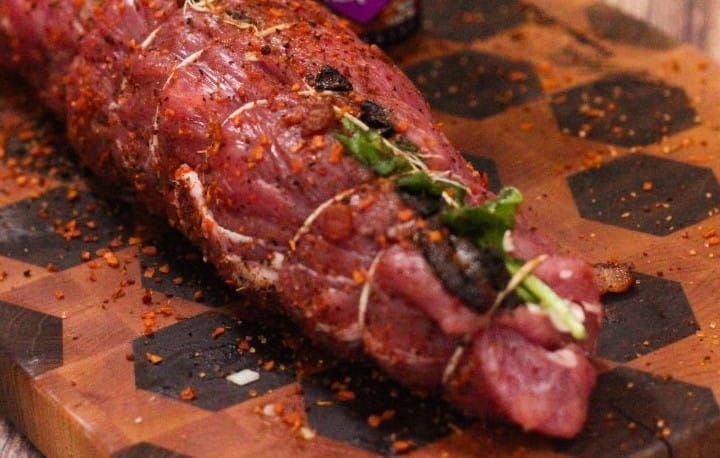 How to Cook Stuffed Pork Tenderloin

With your grill preheated to Medium-High heat, place the tenderloin directly on the grill grates. Close the lid, and cook for approximately 20-30 minutes. Make sure to turn the tenderloin every 5 minutes to ensure it cooks evenly.

Once the meat is fully cooked, remove it from the grill, and allow it to rest for 5-10 minutes. You’re then ready to remove the twine and slice the pork into 1-inch thick rounds to serve.

With your grill preheated to Medium-High heat, it will take approximately 20-30 minutes to cook this pork over indirect heat. Keep a reliable meat thermometer handy. (I wouldn’t dream of cooking any meat without using my ThermoWorks Mk4 to help monitor temperature as I go).

Remove the pork tenderloin when the internal temperature of pork has reached 145 degrees F. Make sure to cook to temperature and not to time to ensure your meat is cooked through and safe to consume.

Can I Cook Stuffed Pork Tenderloin in the Oven?

If you don’t have access to a grill, you can still make this recipe using your oven!

Follow the same steps outlined above to prepare your stuffed pork tenderloin. Next, preheat your oven to 375 degrees F, place your pork in an oven-safe dish, and cook for 20-30 minutes or until the internal temperature of the meat reads 145 degrees (make sure to take this temperature in the thickest part of the meat.

Remove the tenderloin from the oven, rest for 5 minutes, and serve! 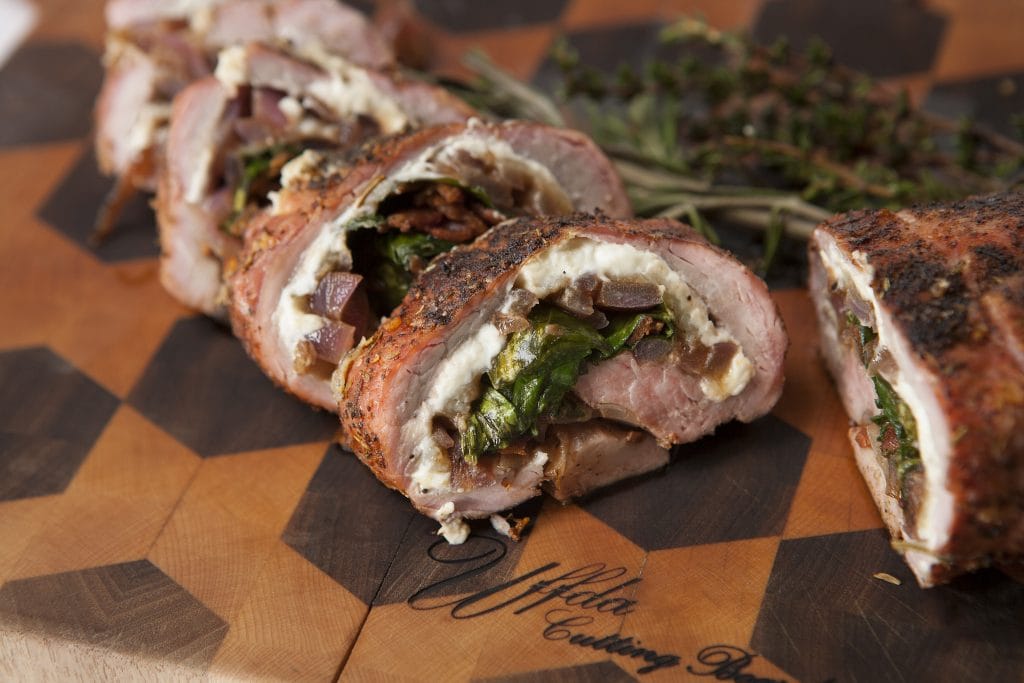 Pork tenderloin is a great cut of meat to cook in your grill or smoker. If you liked this recipe, you’ll love these other delicious tenderloin recipes from Hey Grill Hey:

Watch the video below, and let’s make something delicious! I’m all about helping you make better BBQ, feed the people you love, and become a BBQ hero Check out more Hey Grill Hey behind the scenes action on Instagram, Facebook, and YouTube! 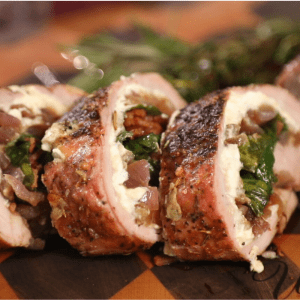 This Stuffed Pork Tenderloin is packed with flavor from balsamic caramelized onions, crumbled bacon, manchego cheese, and spinach. The whole thing is rolled up and grilled until the pork is juicy and the cheese is nice and melted.
5 from 24 votes
Prep Time : 20 mins
Cook Time : 30 mins
Resting Time : 10 mins
Total Time : 1 hr
Servings : 3
Calories : 443kcal
Print Recipe Save to Pinterest

**This post was originally published July 2018. We recently updated it with more information and helpful tips. The recipe remains the same.