Smoked Buffalo Chicken Dip is always the most popular appetizer at any party.

The thing that sets this Buffalo chicken dip above all others is the method. Most dips have you stir every single ingredient together and then bake. I found the best way to assemble the dip for maximum flavor and cheese stretchability is to build layers of flavor! Seasoned cream cheese, sour cream, and mounds of melty pepper jack on the bottom layer cool off the top layer of Buffalo sauce spiked smoked chicken and crumbled blue cheese and the whole thing is topped with fresh red onions and cilantro. Every bite is the perfect blend of creamy, cheesy, spicy, and smoky. There’s no better buffalo chicken dip out there!

The second key to the best ever smoked Buffalo chicken dip is the ingredients, the most important being the smoked chicken! I smoked my chicken using THIS METHOD (but skipping the sauce step at the end) because if you’re here on my website you probably know that I prefer that everything is just a little smoky!

Third has to be the sauce. Buffalo sauce is a major extra key ingredient in this recipe. I say that if it’s buffalo sauce, it’s gotta be Frank’s. There are two different varieties of Frank’s sauce in the grocery store.. Frank’s RedHot Original Cayenne pepper sauce and Frank’s RedHot Buffalo Wing style sauce. I’ve used both and either one work great on wings, but for this dip the Buffalo wing style sauce works best and gives you the most Buffalo-y (that’s a word now) flavor.

Finally, your seasoning. Most Buffalo chicken dip recipes call for ranch powder packets or even ranch dressing to season the mix. While a packet seasoning works just fine in this recipe, if you really want it to pop you have got to try making my Homemade Veggie Shake. It has all the key components of powdered ranch seasoning, but it’s a little punchier and more flavorful. Definitely worth the extra minute to make your own and if you double the recipe, you’ll have lots extra for next time! 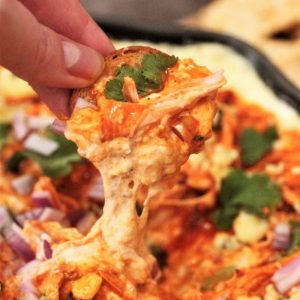