These Beer Brats with Braised Red Cabbage are everything you’ll ever want in a sausage. The brats are incredibly flavorful from being slowly steeped in beer, spices, and onions, and every bite of these brats is a complete explosion of flavor. 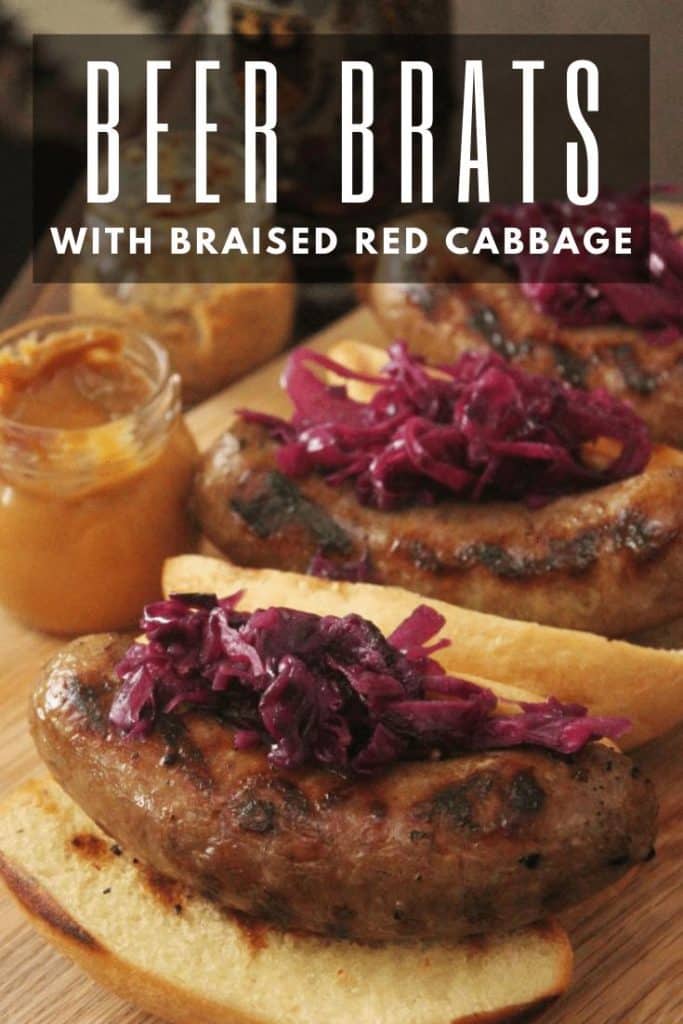 Beer brats are a completely amazing and delicious experience. You begin with brats slow simmered in beer and spices, then finish them hot on the grill. The high heat creates a char on the outside of the brats that’s darn near heavenly. Topped with a sweet and tangy braised red cabbage, this is a game day meal that will knock your socks off.

I added the braised cabbage as an homage to my adoring husband who used to live in Germany and still retains a mild fanboy-style obsession with brats and kraut. I even busted out his beer steins for the photo shoot! Hope you guys all love this one as much as we do. Just be prepared to hate every brat you have at any BBQ you go to for the rest of your life. Sorry and you’re welcome.

One final bonus note: This recipe is a great one to make for crowd or to serve at a party (Superbowl, anyone?). You can prep and simmer the brats while everybody arrives, then spend a few short minutes crisping the sausages and you’re ready to eat!

I feel like I should name drop here to give you a little extra back story on this recipe. First of all, this cooking technique is coming straight to you from my BFF Chef Tyler Florence. When I was in NYC in August 2015 going for a Guinness World Record in marathon grilling (seriously, craziest experience of my life), good ol’ T-Flo (that’s what I call him…not to his face) asked me how I prefer to cook my sausages. I told him I like to go low and slow over wood smoke to retain lots of moisture and avoid wrinkly dogs.

Tyler proceeded to lay down some serious sausage knowledge which I soaked up in my sleep-deprived world record haze and brought back to share with you. Tyler told me the secret to juicy and tasty sausages is a pre-grilling simmer in super flavorful liquid. Not a boil, mind you, but a slow gentle simmer to bring your sausages up to temp and infuse them with extra layers of goodness. Next, a quick sear to crisp up the sausage casing and you’re good to go for the best sausage of your life!

Like I said, I took his advice and used it to make these fan-freaking-tastic beer brats. The take home message, friends? Simmer instead of boiling these tasty brats. It’ll make all the difference. 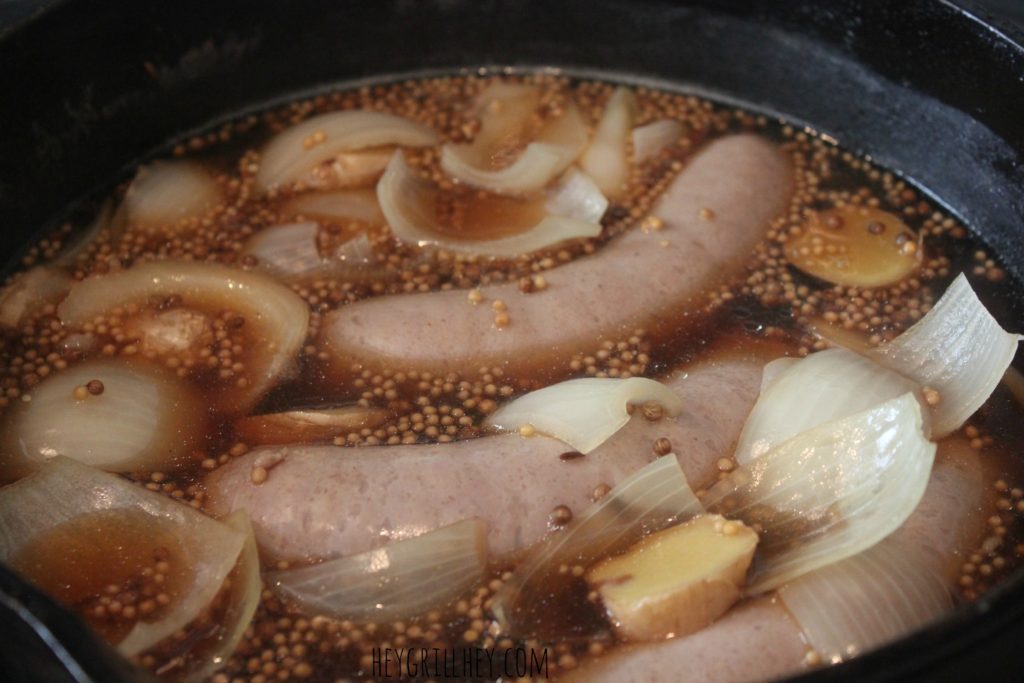 How to Cook Beer Brats

So, I’ve talked up these brats quite a bit. Now to the good stuff. Here’s how to make these packed-with-flavor, want-to-eat-them-all-the-time brats: 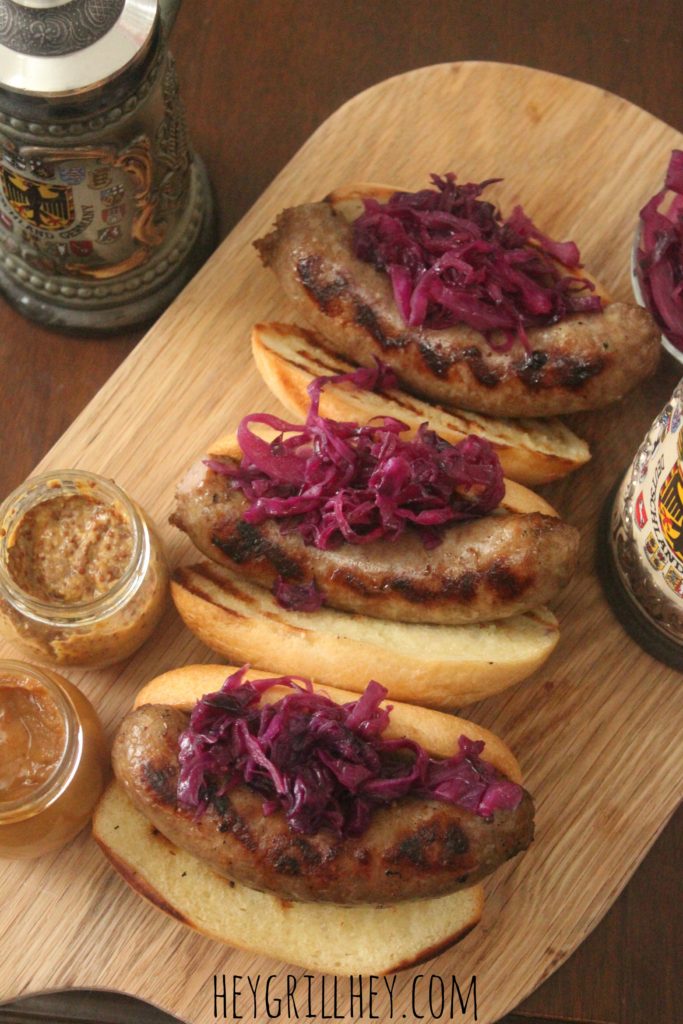 Ah, brats and hot dogs. There’s something so satisfying about a good brat or hot dog in the afternoon (and on nights and weekends too!). If you’re looking for a bunch of great bratwurst and hot dog recipes, look no further than Hey Grill Hey. We have top-notch recipes to keep your palate satisfied.

Watch the video below and I’ll show you how I make these beer brats at home. I’m here to help you make better BBQ, feed the people you love, and become a backyard BBQ hero. Check out more of my smoking and grilling recipe videos on YouTube, Instagram, or our Facebook Page. 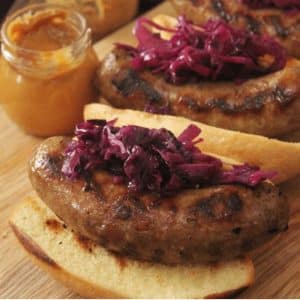 Susie Bulloch
These Beer Brats with Braised Red Cabbage are everything you’ll ever want in a sausage. The brats are incredibly flavorful from being slowly steeped in beer, spices, and onions, and every bite of these brats is a complete explosion of flavor.
5 from 1 vote
Prep Time : 10 mins
Cook Time : 20 mins
Total Time : 30 mins
Servings : 5 people
Calories : 402kcal
Print Recipe Save to Pinterest

**This post was originally published January 2016. It has since been updated with more information and helpful tips. The recipe remains the same.