That Time I Broke a Freaking Guinness World Record 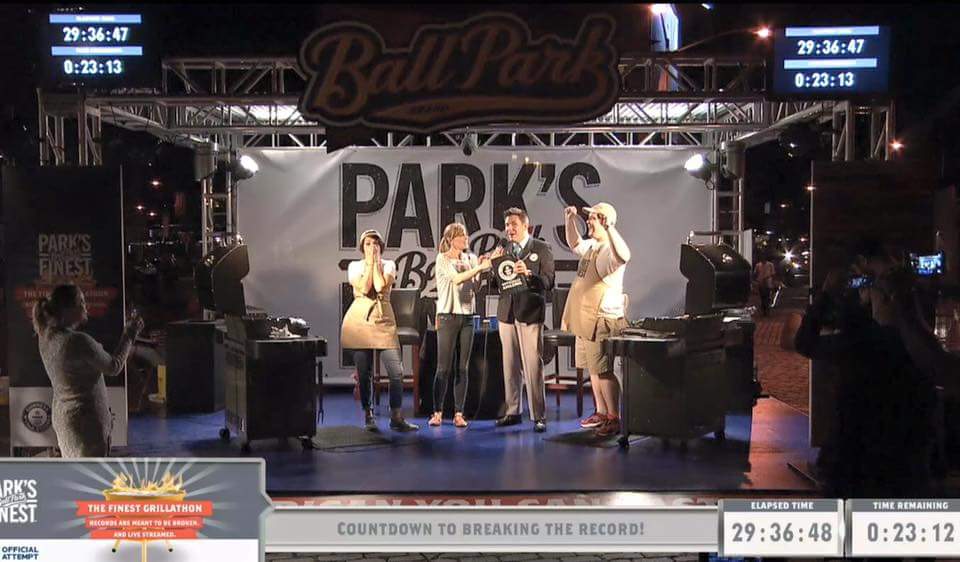 So I feel like the title of this post really gives you a fair lead-in as far as what you’re about to read, but in case it didn’t let me give you a hint: I broke a Guinness World Record last week. For grilling. For a really really long time. And since the record has been broken, I’ve been blessed with some pretty fun media coverage (CNN, The Guardian, The Daily Herald). As my husband puts it, I’m famous now.

Seriously though, I’m not famous. I do not currently have an offer to move to New York and become a Food Network personality. I don’t even make enough moolah from this cute blog here to pay for the fuel for my grill each month. Ha! Yes, it was absolutely one of the best experiences of my whole life though and I’m so stoked to be able to tell you about it! If you are interested in all of the details, read on. If you’re not, then go check out my recipe section. There’s good stuff in there! 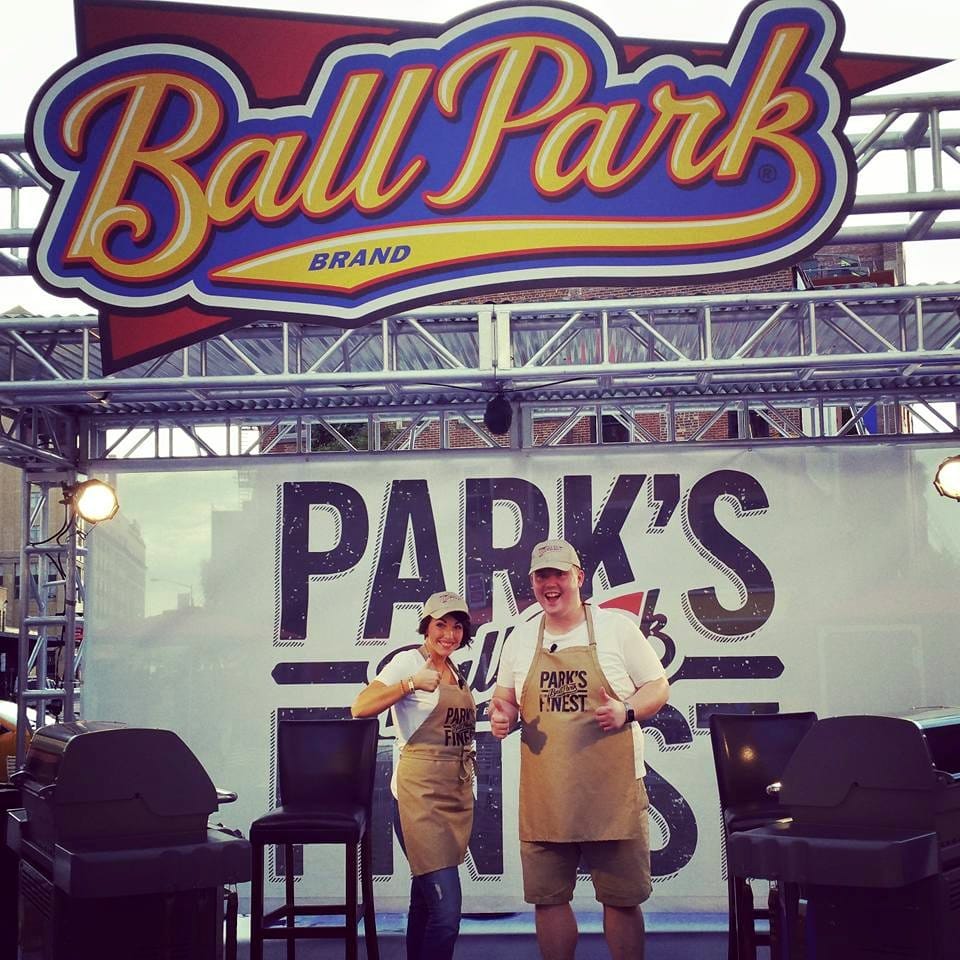 The day was Monday, July 28th around 11 AM and I was scrolling through my instagram feed while my youngest napped. I saw a post from Ball Park Brand (think hot dogs) that was reminding people to get their entries in for the Finest Grillathon. Intrigued, I went to the webpage and read the entry rules. Submit a 2 minute video telling them why I should be picked to be on the Record Breaking team of grill masters and show them my grilling prowess. The contest ended that same day at 4 PM. The timing was going to be close, but something was seriously pushing me to make this happen for some reason. I knew I wouldn’t have time to go to the store, so I texted neighbors and begged for ingredients. I had just enough stuff to make some decent hot dogs while my babe finished up his nap. Once he woke up, I gave him a sippy, gathered ingredients and made my video. You guys, it was not my best work.

I’m not saying that to be humble. If you know me, you know I’m cool with taking credit for my own awesomeness… this is not one of those times. I didn’t have time to fix my hair or make-up (I spent all of the beauty prep time on the hot dogs) and I didn’t have any time to edit the video. This was a one and done kind of a situation. If you watch my video, you can tell I slipped up a few times. When I was done, I uploaded the video to YouTube (you can watch it if you really want to laugh in an incredulous way, I won’t feel bad) and submitted everything on the entry form. The time was 3:58 PM. I made the cut off by 2 minutes. Talk about under the gun. I sent a text to my hubs with the link to the video and he laughed with me about the overall unimpressive showing. I didn’t think about the contest again, I’d written it off as an honest attempt but an obvious loss. 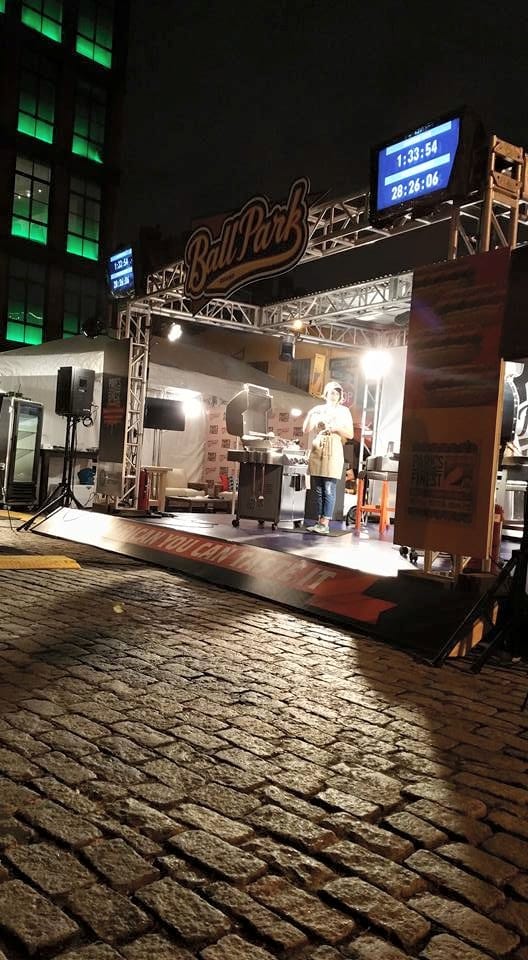 Thursday morning, I got an email asking me to remove the background music from my video. I thought this was just a professional courtesy that they were offering to anybody who submitted a video that wasn’t within their guidelines. I fixed the video and just as I hit send on the email with a new link, my phone started ringing with a phone number from New Jersey. Normally I reject any phone calls I don’t know, but for some reason I answered this one. It was somebody from the contest board making sure I had received the email and telling me they really wanted me to re-submit my video. At this point, I realized I might actually be in the running so I sent a text to Todd and gave him a heads up. He literally had no idea what contest I had even entered. When he read about the prize, I’m pretty sure his exact text back to me was, “I would pee myself if you won this.” 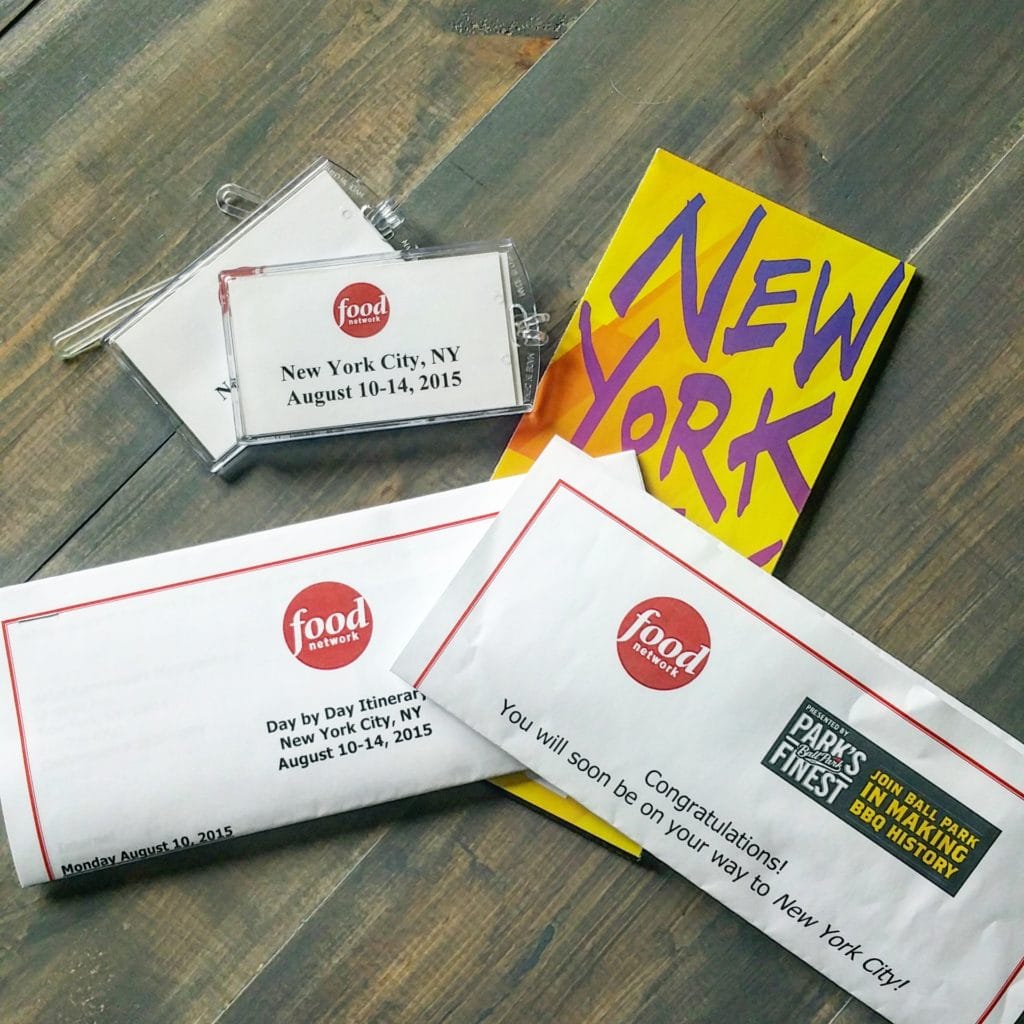 Spoiler alert, he didn’t pee himself. After receiving the magical phone call that I had won, I screamed, danced like an idiot by the swimming pool, then called Todd to tell him we were going to NYC! We had a week and a half. We had no itinerary. We had absolutely no idea what to expect. This stressed me out in ways that I can’t even explain to you. I had to let go of my Type A planning self and just embrace the crazy. 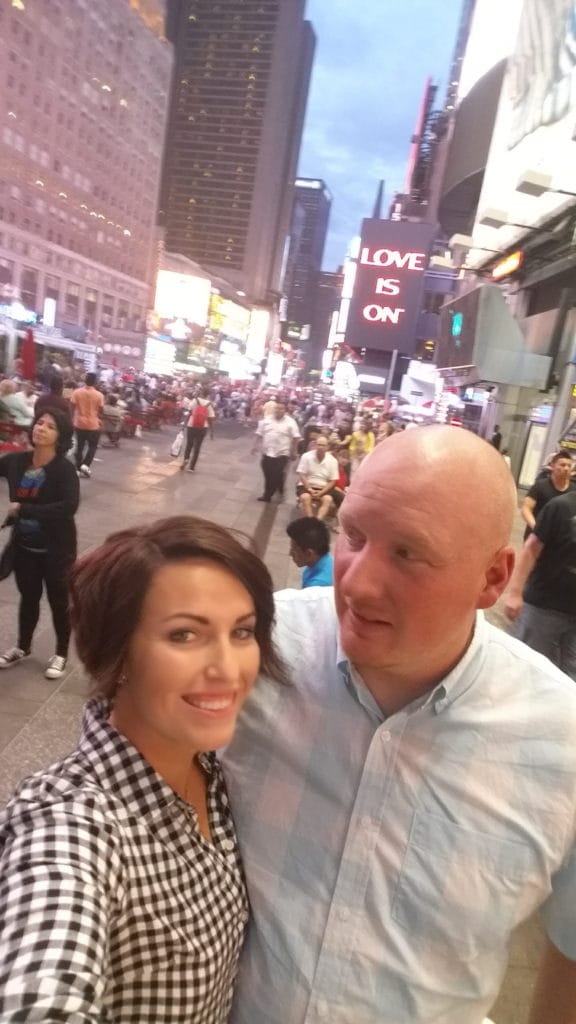 We took off on Monday morning (just 2 weeks after entering the contest) and headed for the Big Apple. We explored NYC Monday night and Tuesday (after a short pre-production meeting) and then Tuesday night we started the Grillathon! Honestly, I have some really clear memories, and some really hazy memories. I can tell you that I will never forget the opportunity I had to meet the people I did and be involved in such an amazing production. Not only did we grill for 34.35 hours, we were also on a live webcast the ENTIRE time! I ate, cooked, told everybody when I needed to pee, and fought through the delirium on live TV. It was like a whole season of Real Housewives, without the wine and affairs, all slammed into 2 nights and 1 day. During this ridiculous marathon, we broke a Guinness World Record. Legit broke it. I am IN THE BOOK! 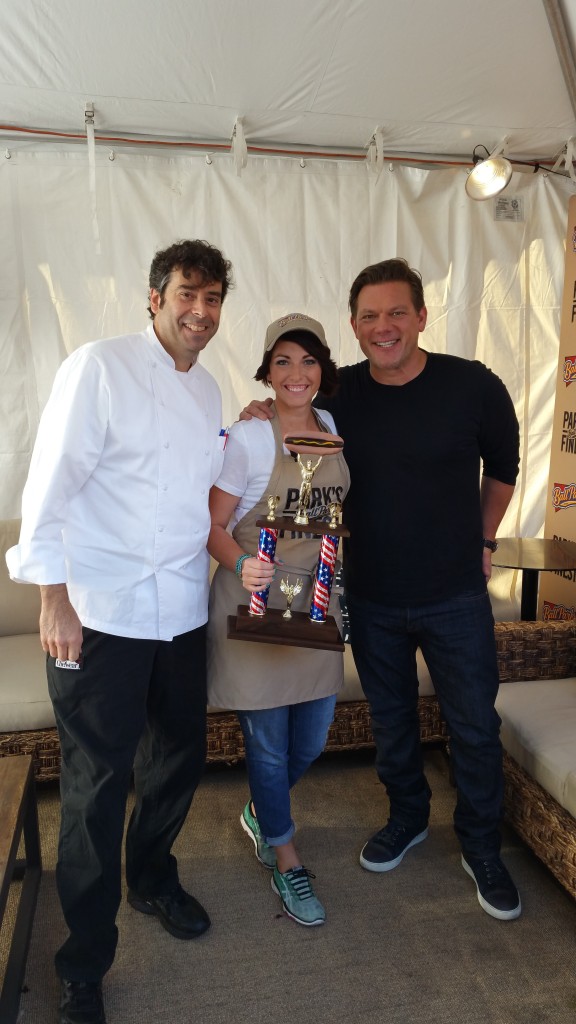 You guys, seriously though. I cooked with Tyler Florence (he even used my apron as a napkin for his greasy hot dog fingers.) I met the executive chef for Food Network. And we like, hit it off (that’s the guy in the white chef’s coat in the pic above.) I talked to a head exec at Food Network (Susie Fogelson, Food Network Star fans.) I got business cards and email addresses that I could not have paid people to get 2 weeks ago. I have been processing the magnitude of this week from the minute I stepped on the plane and will continue to think through and commit to memory every single thing I can until I am sick of myself for thinking about it. 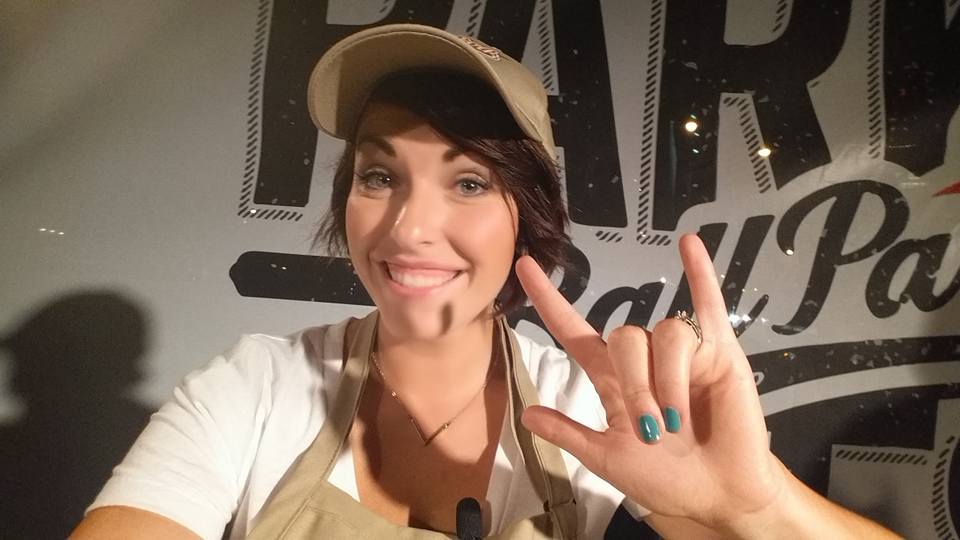 None of this would have been possible without the AWESOME production crew at Y & R Advertising, Ball Park Brands, and the Food Network (did I mention I was on the Food Network blog? Kill me dead.) These people were the real deal and made me pretty desperate for more opportunities like this in the future. Also, my family and friends back home. You guys watched way more hours of this thing than you should have. The texts, tweets, comments, and posts were so encouraging and exciting! Jazz hands forever. 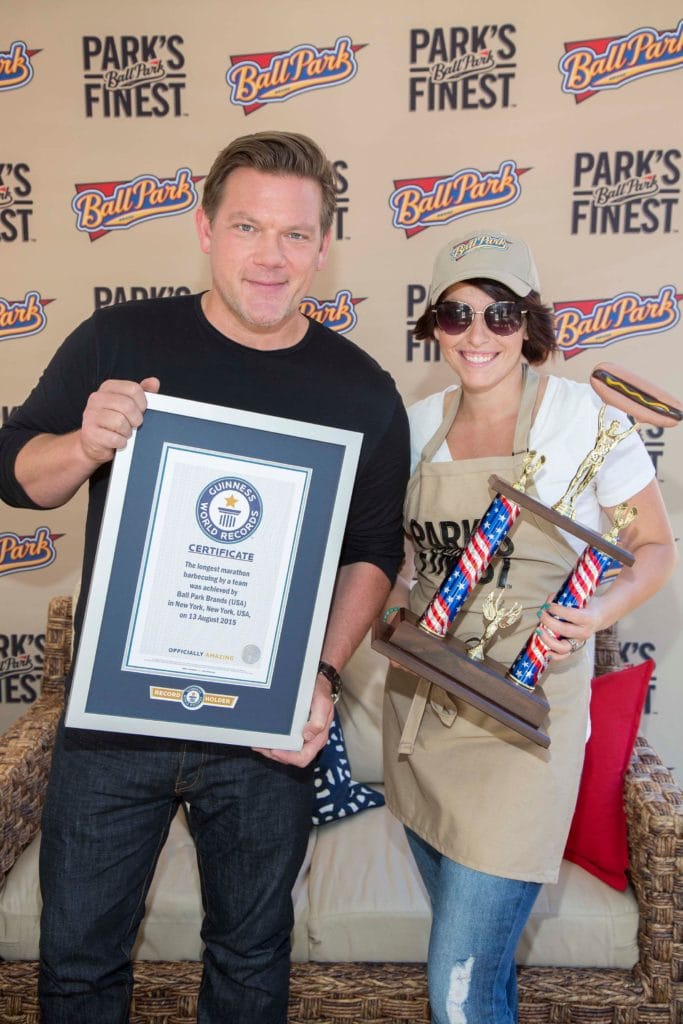 I hope you guys stick around for more fun things going forward. Start out by following my social media accounts! I’d love to chat and hang out on Instagram, Facebook, and Pinterest!!