Bacon Wrapped Brats with Beer Cheese Sauce are a delicious mash-up of some of the world’s tastiest foods. Juicy grilled brats, crispy bacon, and melty, rich beer cheese sauce come together for brat unlike any other. They’re the perfect handheld food for your backyard get-togethers or tailgating parties! 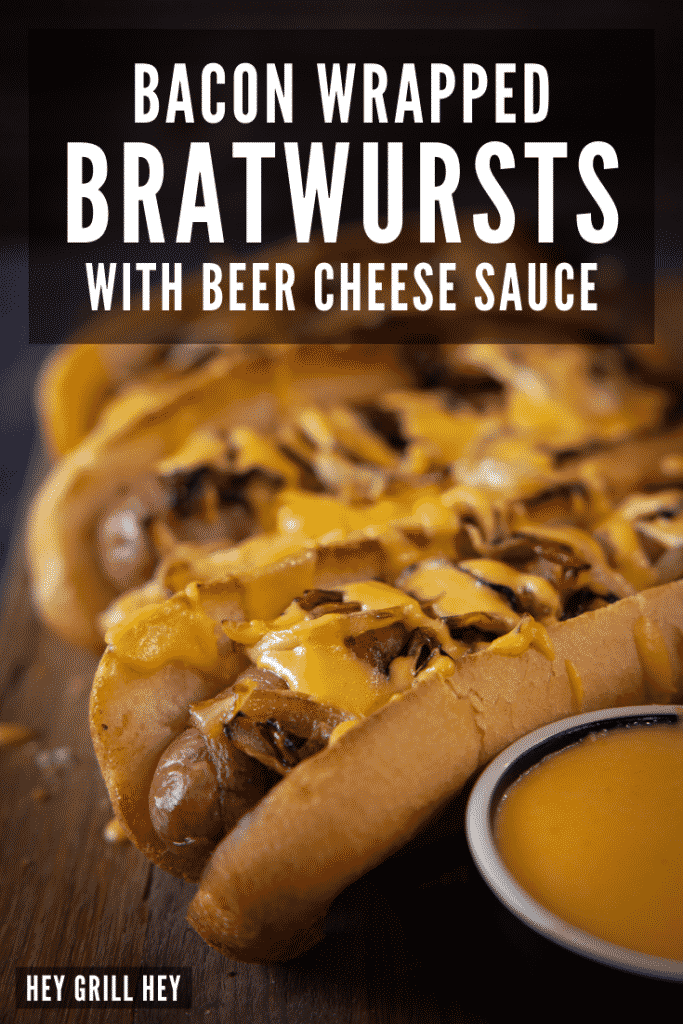 This recipe starts with tradition German style uncooked bratwursts. Don’t buy anything pre-cooked for this recipe or your brats will be overdone and dry before your bacon is crisp.

Speaking of bacon, keep it simple. No need to go crazy with super thick cut maple or peppered bacon. Just make sure it is nice and meaty and preferably hickory or apple wood smoked. If you have it available, definitely try making these with my homemade bacon. Game changer! Plan on 2 pieces of bacon per bratwurst. 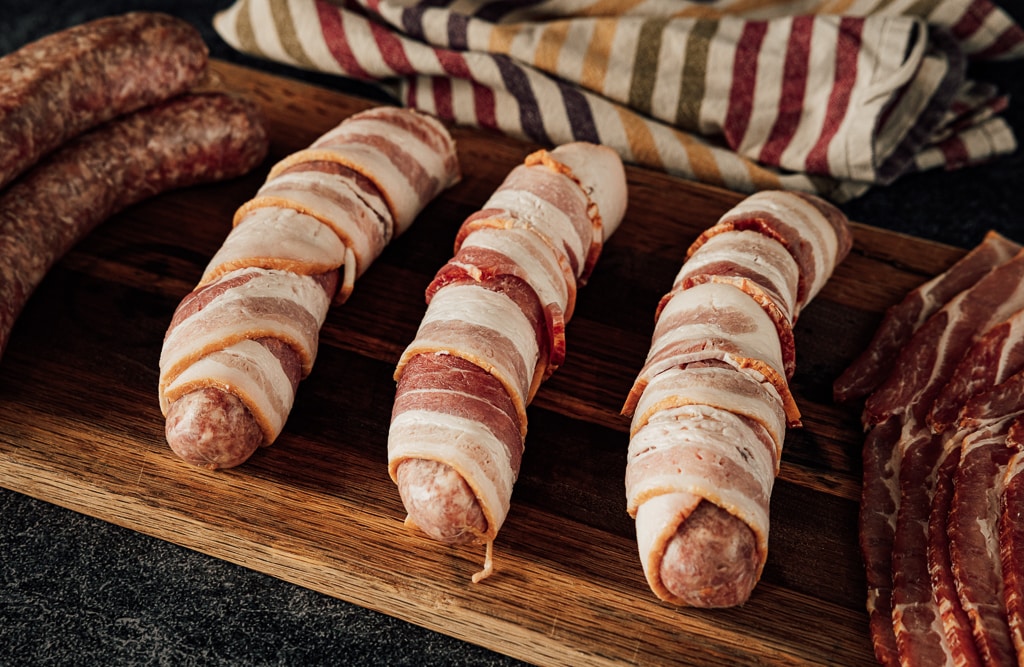 This beer cheese sauce is the secret element in making these brats so darn good. This is a really simple recipe that you can easily adapt to use as a dip or a soup depending on how much liquid you add.

The amount called for in the recipe below makes this perfect for drizzling all over the bacon wrapped bratwursts, but if you wanted to make a thicker dip for crackers or vegetables, reduce the amount of milk and beer. If you want to eat it as a soup, increase the amount of liquid until you reach the consistency you like! 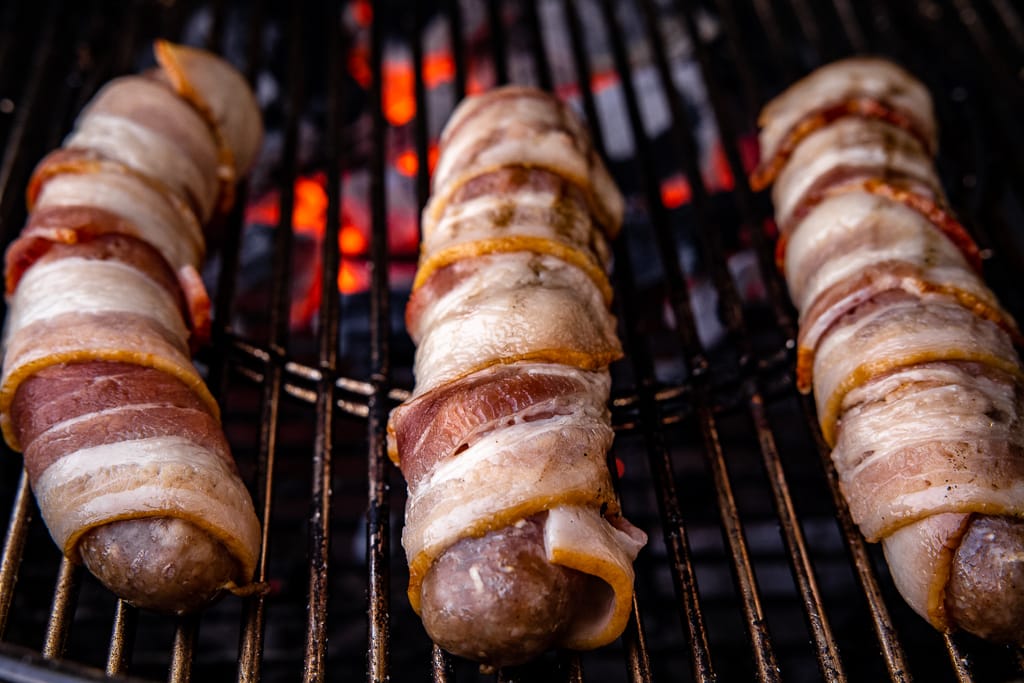 How to Grill Bacon Wrapped Brats

When preheating your grill, you’re going for High, indirect heat. You want your grill to be hot enough to crisp the bacon (around 400-450 degrees F), but you don’t want the bratwursts sitting directly on top of the flames. The rendered fat will drip down onto the flames and cause some serious flare-ups that can cause your brats to taste ashy.

Place the coals on one side or turn on the burners on one side (or if you’re using a pellet grill, you’re already cooking indirect) and grill your bacon wrapped bratwursts just on the edge of that high heat without being directly over the flame. If you want to add a little extra crispiness, move the brats to the direct flame side for 1-2 minutes when they are almost to the correct internal temperature. Most of the fat will have rendered at this point so you shouldn’t have to battle flare-ups too much. Just make sure you are turning regularly at this point.

When the brats are finishing up, don’t forget to toast your buns as well. Toasty buns make all the difference. That little bit of crunch from the bun mixed with the brat and beer sauce is perfect meal harmony.

From there, you are ready to load up with a bacon wrapped bratwurst and some ooey gooey beer cheese. If you want to add a little extra crunch or flavor, some tasty additions would be chopped white onions, pickle relish, and some nice whole grain mustard. 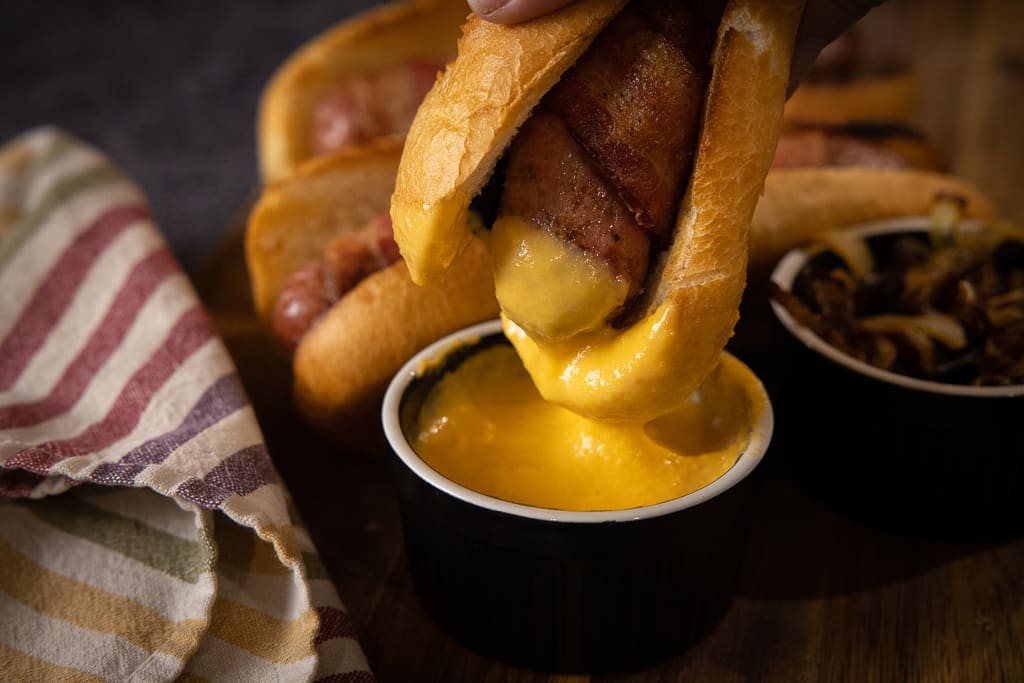 If you liked this bratwurst recipe, you’re sure to love these other brat and dog recipes from Hey Grill Hey. 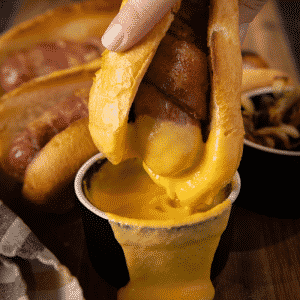 Susie Bulloch
Bacon Wrapped Brats with Beer Cheese Sauce are a delicious mash-up of some of the world's tastiest foods. Juicy grilled brats, crispy bacon, and melty, rich beer cheese sauce come together for brat unlike any other. They're the perfect handheld food for your backyard get-togethers or tailgating parties!
5 from 4 votes
Prep Time : 15 mins
Cook Time : 20 mins
Total Time : 35 mins
Servings : 6 people
Calories : 730kcal
Print Recipe Save to Pinterest

**This post was originally published in February 2018. We recently updated it with more information and helpful tips. The recipe remains the same. 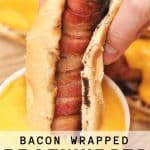 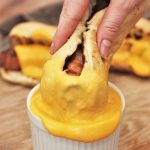