This Bacon Mac and Cheese is the grown up version of that comfort food you know and love from your childhood. It is easy to make and tasty to eat! You just can’t go wrong with a heaping amount of bacon added to your mac and cheese! 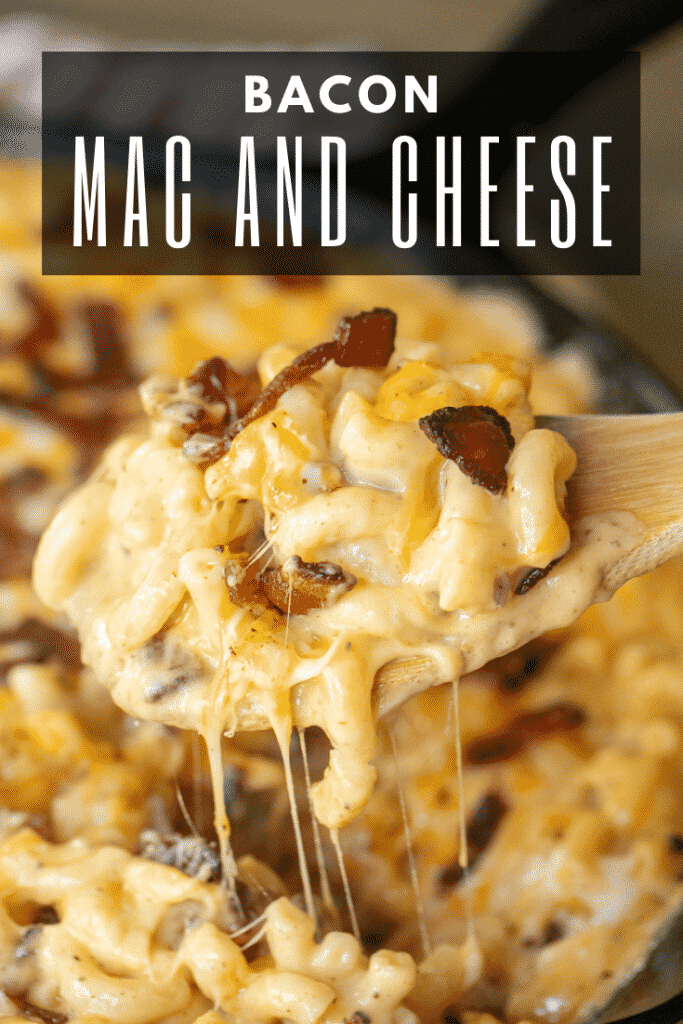 Homemade Mac and Cheese with Bacon

I feel like there is so much to say about this mac and cheese recipe that I don’t even know where to start! My love of mac and cheese is a strange one. It’s like that boy you dated your freshman year, and it was alright because you were both pretty immature but you knew it wasn’t love or anything so eventually you parted ways. Then, years later, you bump into him at a restaurant and he is like super fine and he wants your number, but you hesitate because he was the guy that thought wet willies were a great way to flirt. You figure, what the heck, let’s give this another shot! Within months you are inseparable and you are in love and everything is the best ever. And then you get married and have babies. Happily ever after, right?!

So now apply that weird story of my relationship to mac and cheese. I was cool with eating that boxed stuff for a while, but eventually I outgrew it. I tried the “fancy” boxed mac n cheeses (you know, with the premixed sauce ooze) but it made me gag. So I just stopped eating mac and cheese altogether. Then many years later, one of my favorite food blogs posted a recipe for homemade mac and cheese and I got pretty stoked! Homemade mac and cheese?! I didn’t even know you could do that! So I cooked up some stuff from scratch and it was rather decent. I knew it needed a few modifications to match my grown up standards, but it had to be classic enough to not scare away my kids.

(Note: Butternut squash mac and cheese will scare away your kids. And probably your husband.) 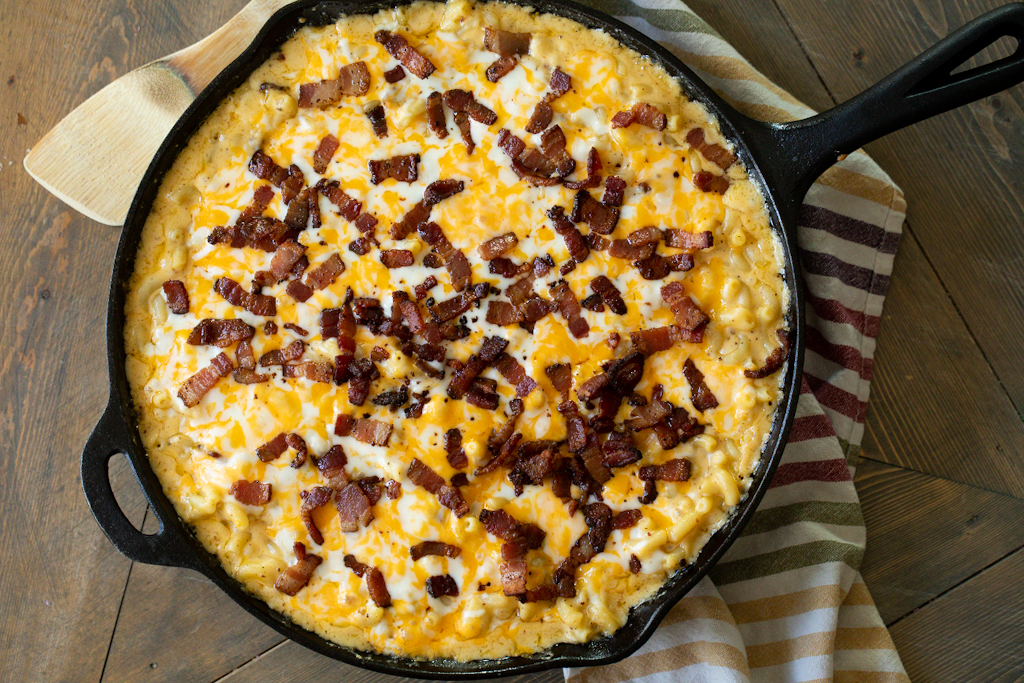 How to Make Bacon Mac and Cheese

After SEVERAL renditions over the past few years, I love what this mac and cheese has become. It’s rich, it’s creamy, and it has the most amazing stringy melted cheese dripping off of each bite. It also has those beautiful browned crispy cheese pieces around the edges, and it has bacon! Those salty little morsels of pork love are mixed into the mac and sprinkled on top so every single bite has a little extra boom-boom.

Here’s the 411 on making this tasty treat:

Note: This mac and cheese can be cooked in the oven or on your grill. You can also cook it in a baking dish or a 12″ cast iron skillet. Both will result in delicious bacon mac!

Also note: This is comfort food. This is not health food. I like to serve my family healthy food as often as I possibly can, and we eat as much food as possible that is prepared from scratch instead of processed, but goodness gracious, sometimes you just need a big ol’ helping bowl of comfort. Oh, and no, this doesn’t have to be made on the grill. If you have a grill that can maintain a steady flow of indirect heat, go for it! If not, stick it in the oven. 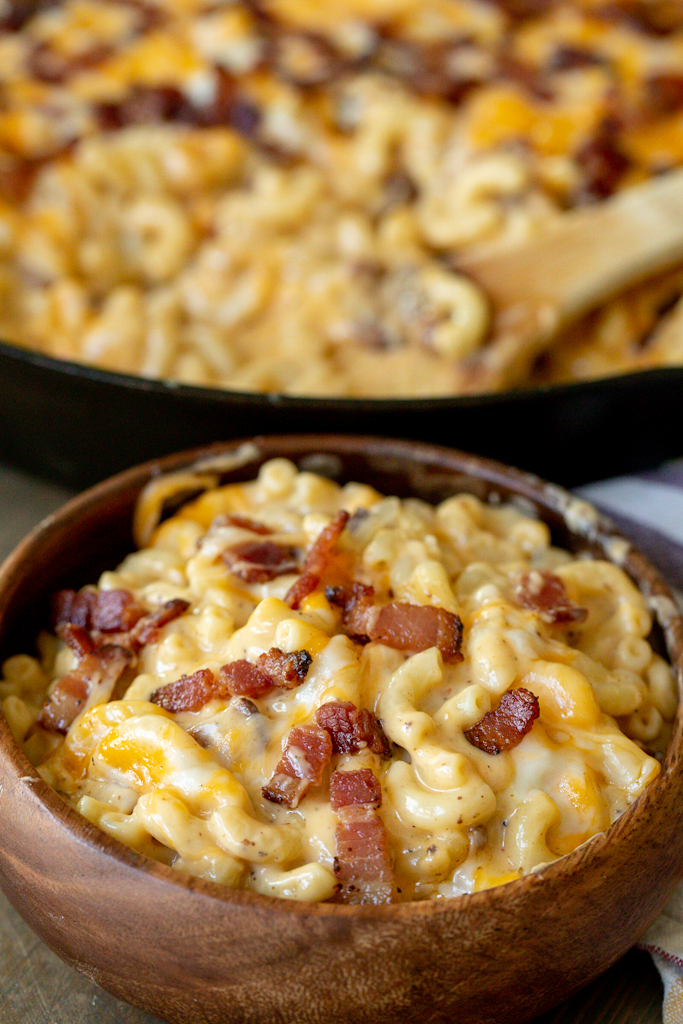 Mac and cheese is that awesome, amazing comfort food that tastes as good on a rainy day as it does in the middle of summer. Check out more wonderful mac and cheese recipes from Hey Grill Hey below: 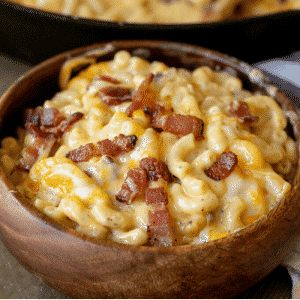 This Bacon Mac and Cheese is the grown up version of that comfort food you know and love from your childhood. It is easy to make and tasty to eat! You just can't go wrong with a heaping amount of bacon added to your mac and cheese!
4.86 from 7 votes
Prep Time : 15 mins
Cook Time : 20 mins
Total Time : 35 mins
Servings : 6 people
Calories : 1280kcal
Print Recipe Save to Pinterest

**This post was originally published in April 2015. We recently updated it with more information and helpful tips. The recipe remains the same. 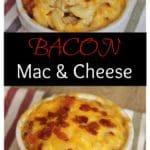 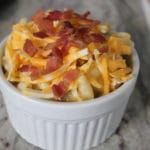 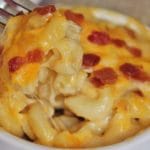