This Smoked Chile Verde is incredibly simple to make and off the charts delicious. Eat it straight off the bone, or serve it in tacos, burritos, on nachos and so much more. Save this recipe for later, it’s a keeper. 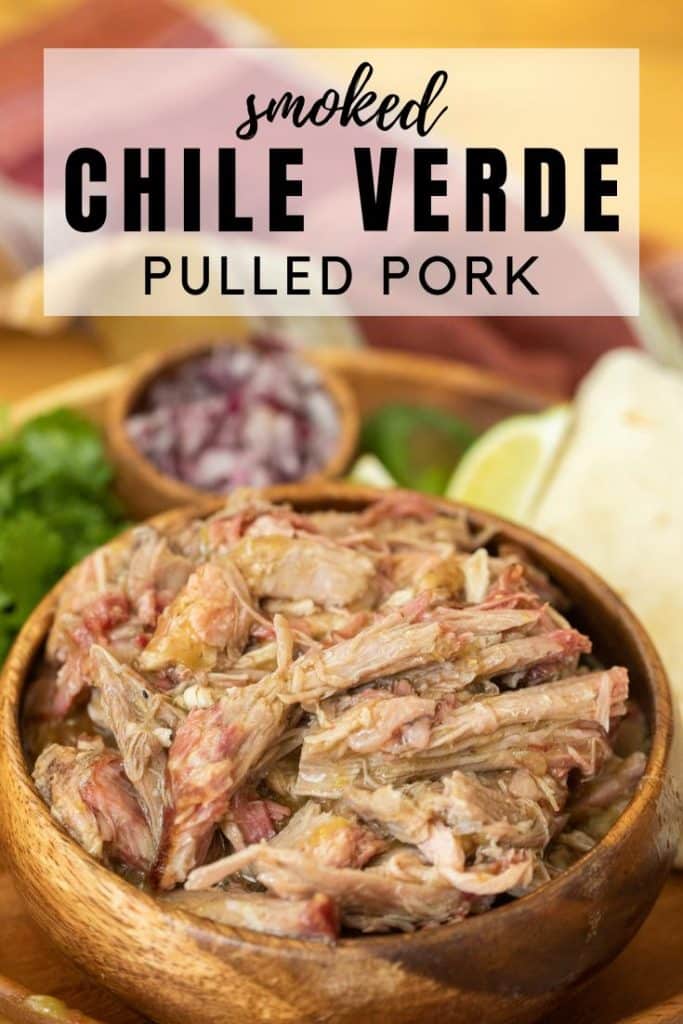 What is Chile Verde?

In it’s most basic state, chile verde is a stew of tender pork or beef in a savory green sauce. The sauce is made from tomatillos and green chile peppers. The heat of the chile verde can be adjusted to be mild to medium to hot, and the meat can be prepared in a number of ways.

If you search for chile verde, you’ll often see it spelled chile or chili. The first part of the name “chili” indicates that this is a stew-type soup made with meat and beans. “Verde” is Spanish for green, meaning chili verde is basically a green chili. In chili (or chile!) verde, we often omit the beans from the stew, and the green sauce and tender meat take center stage. When spelled “chile,” you often get the same recipe, the name is just indicating that it is a green sauce made with chiles.

Recipes for chile verde vary greatly by location with Mexican varieties differing from recipes in the states (and each state in the West having their own preferences and ingredients). No matter where you go or what recipe you follow, you’ll know you’re likely to get a stew with a flavorful meat and some variation of tasty green chiles and sauces. 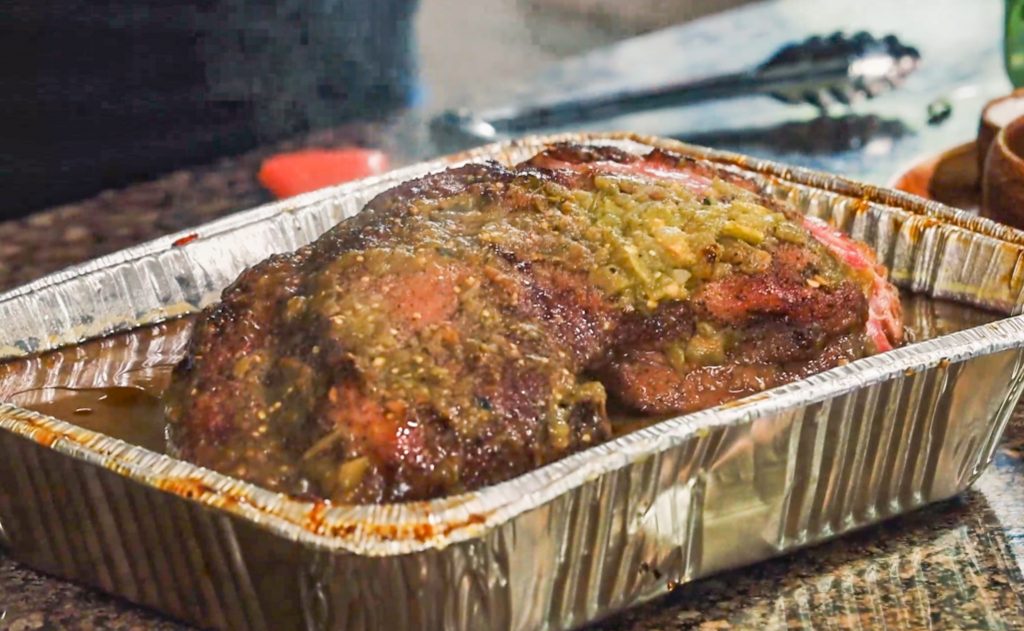 This pulled pork chile verde is incredible in tacos, burritos, enchiladas, nachos, and sandwiches. I like to eat mine with a squeeze of lime, a side tortilla, fresh chopped red onions, sour cream, and cilantro. There’s no judgement here on how you choose to enjoy this smoked chile verde. The sky really is the limit.

This smoked chile verde pulled pork uses a combination of three sauces as a braising liquid to braise the pork after it’s had its initial smoke. These three Here’s what you’ll need to make this sauce: 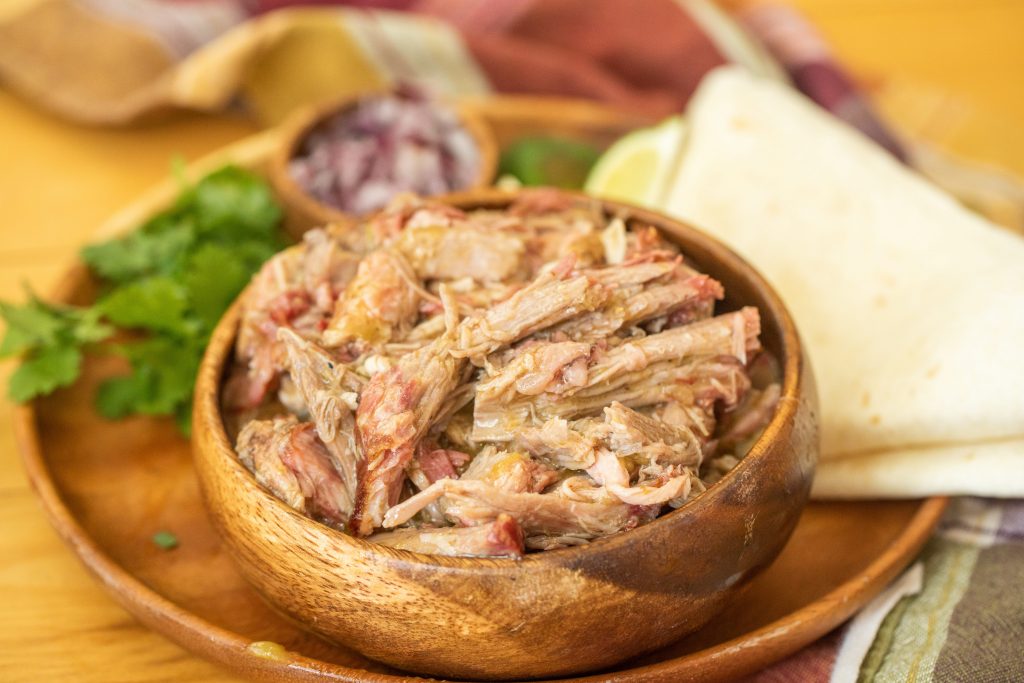 How to Make Smoked Chile Verde

With only 5 ingredients, this smoked chile verde is simple to make and requires little more than seasoning your meat, watching your smoker temp, and giving it a little bit of time.

Begin by seasoning the pork shoulder with my Signature Beef Seasoning. You can purchase this seasoning online from Patio Provisions, or you can use a simple seasoning of equal parts salt, pepper, and garlic powder (I like to mix these in a small bowl before sprinkling on the meat).

With your smoker preheated to 225 degrees, smoke the pork for 8 hours straight on the grill grates. You’re aiming for the internal temp of the meat to reach 160-165 degrees F. Make sure you have a reliable meat thermometer on hand so you get an accurate reading.

Once your meat is between 160-165 degrees F, remove it from the smoker and place in a disposable aluminum pan. Dump the three cans of chile verde sauce goodness right over the meat. Using a large sheet of heavy duty aluminum foil, tightly cover the pan. You want to create an airtight seal, allowing the meat to braise inside the foil.

Return the meat to the smoker for an additional 2-3 hours. Remove the meat when the internal temp reads 195-203 degrees F. Allow the meat to rest for 30 minutes to 1 hour before shredding and serving. Taste the pork and add additional salt, as needed.

I love some good Tex-mex or Mexican-inspired BBQ. Sometimes you just can’t beat the spicy, sweet flavors of these recipes. Check out more BBQ recipes from Hey Grill Hey when you’re wanting a kick of great flavor.

Watch the video below, and let’s make something delicious! I’m all about helping you make better BBQ, feed the people you love, and become a BBQ hero Check out more Hey Grill Hey behind the scenes action on Instagram, Facebook, and YouTube! 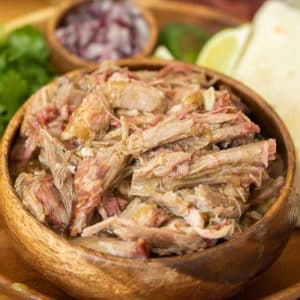 Susie Bulloch (heygrillhey.com)
This Smoked Chile Verde is incredibly simple to make and off the charts delicious. Eat it straight off the bone, or serve it in tacos, burritos, on nachos and so much more. This is one pulled pork that you'll keep coming back to again and again.
5 from 17 votes
Prep Time : 15 mins
Cook Time : 11 hrs
Resting Time : 1 hr
Total Time : 12 hrs 15 mins
Servings : 10 people
Calories : 410kcal
Print Recipe Save to Pinterest