This Skillet Bacon Apple Crisp is the ultimate apple crisp. Bacon and a salted bourbon caramel beautifully compliment the tart apples in the crisp. By cooking this apple crisp in a skillet, it comes out perfectly cooked with the serving dish built right in! 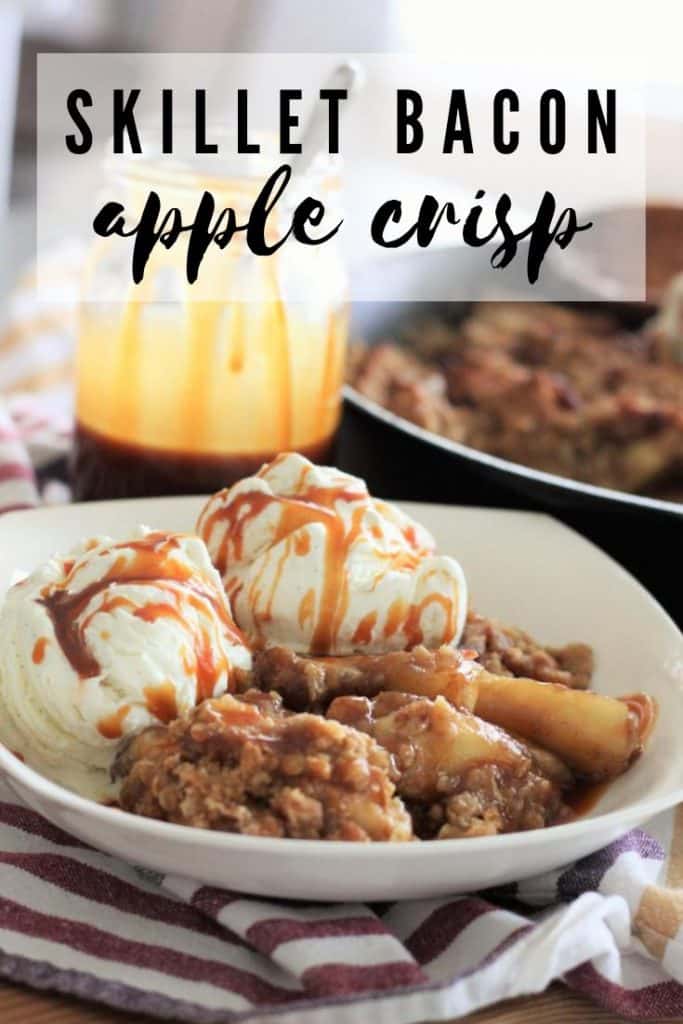 This recipe rose to fame when I cooked it during the finale episode of Food Network’s show BBQ Brawl. I was a finalist and competing for the title of Master of ‘Cue. When the judges asked for a dessert to serve with our whole hog, I knew exactly what to make! While I didn’t win the episode, this homemade apple crisp with bacon stole the show. Michael Symon finished his entire bowl, and World Champion pitmaster Chris Lilly asked for seconds. It actually WON the dessert challenge, so I feel like you need to get it on your next BBQ menu, ASAP!

Apple crisp is a early fall staple in our house. The weather is absolutely perfect for grilling in the evenings, and this sweet apple dessert just makes everything feel and smell like autumn.

Tender, crisp apples, cinnamon, and nutmeg bubble away under a buttery crust laced with bacon and brown sugar. The whole thing is topped with a salted bourbon caramel that will knock your socks off. Serve with a side of vanilla ice cream, and this homemade apple crisp just can’t be beat. You can always bake this in your oven, if needed, but cooking on your grill with apple wood infuses the dessert with a layer of smoky flavor that really makes this apple crisp sing. If you’ve never baked dessert on your grill, this is apple crisp recipe is a great place to start!

I make this apple crisp in a 12 inch cast iron skillet . Cast iron is pretty important on a grill because it helps distribute the temperature evenly. Even still, make sure to turn your crisp halfway through cooking since you’ll have higher heat on one side. In addition to allowing the apple crisp to cook evenly, baking in a cast iron skillet allows you to serve straight from the pan.

If you are cooking on a propane or charcoal grill, you can really benefit from purchasing a small grill top smoker box and wood chips. These are fairly inexpensive and allow you to add real wood smoke flavor to your foods without worrying about tending a wood fire. If you don’t want to get a smoker box, you can get a similar effect with a foil pouch filled with wood chips and punctured all around to allow the smoke to escape.

Quick tip: I usually prep everything in the afternoon and then put the crisp on the hot grill while we are sitting down to dinner. The smell of it cooking is enough to get my kids to eat every single veggie on their plate so they can have a bowl full of dessert. This dessert is a family favorite, and we hope you love it as much as we do! 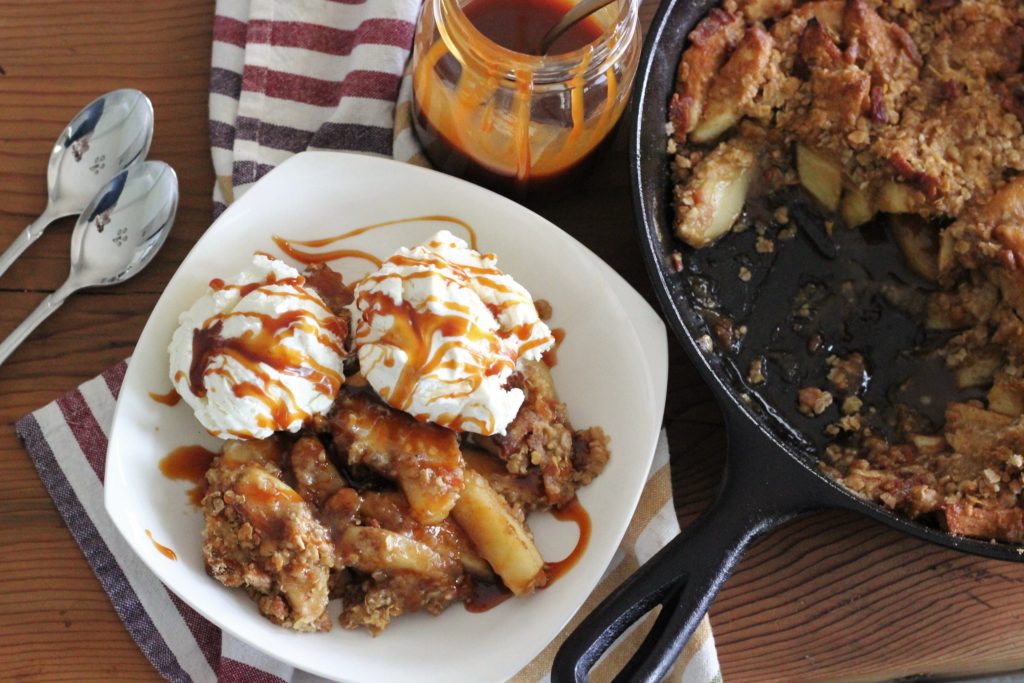 How to Make Apple Crisp

Making an apple crisp in a skillet is delicious and fairly easy. Simply follow these step-by-step directions, and you’re well on your way to eating the best apple crisp of your life!

Follow the recipe, and I’ll teach you the simple steps to making your own skillet apple crisp at home. Hey Grill Hey is dedicated to help you make better BBQ, feed the people you love, and become a backyard BBQ hero. You can find more of my smoking and grilling recipes and videos on YouTube, Instagram, or our Facebook Page. 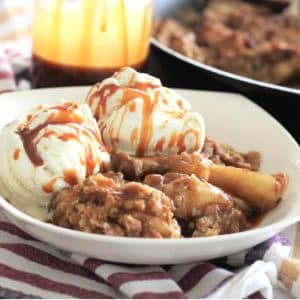 This Skillet Bacon Apple Crisp is the ultimate apple crisp. Bacon and a salted bourbon caramel beautifully compliment the tart apples in the crisp. By cooking this apple crisp in a skillet, it comes out perfectly cooked with the serving dish built right in!
5 from 3 votes
Prep Time : 20 mins
Cook Time : 40 mins
Total Time : 1 hr
Servings : 8 people
Calories : 677kcal
Print Recipe Save to Pinterest

**This post was originally published September 2016. It has since been updated with more information and helpful tips. The recipe remains the same.