Gather ’round grill masters! Today, we’re taking a look at the latest and greatest from recteq, the RT-B380X Bullseye Deluxe! The Bullseye Deluxe is a much improved version of the classic Bullseye, boasting a maximum temperature of 1000 degrees as well as many premium improvements over the former. Does it actually get as hot as recteq claims? Is there enough of an improvement to justify the massive price increase over the original? Let’s find out!

recteq sent us this grill for testing and review purposes; however, all opinions are our own.

Please note: Hey Grill Hey is supported by its readers. We may earn an affiliate commission at no extra cost to you if you buy through a link on this page.

Check out the great features of the recteq RT-B380X Bullseye Deluxe pellet grill:

The recteq Bullseye vs the Bullseye Deluxe

As many readers may recognize, this grill actually has an older sibling! Recteq is marketing the Bullseye Deluxe as the premium version of that original grill. We’ve taken a look at the original Bullseye here at Hey Grill Hey before, and you can find that review HERE. Although the two grills may look similar, it doesn’t take long before you start to notice some major differences.

The Legs and Hopper

Likely the first difference most will notice when comparing old with new is the brand new support system the Bullseye Deluxe rides on. This support system is akin to what you’ll find on an RT-700 or RT-1250 straight from the factory. The new legs and hopper body provide much needed support to this take on the Bullseye, completely fixing the only con I had for the original. The roller blade style wheels make moving this light grill around super easy, and that lower shelf completely removes any wobble.

Along with the much needed leg upgrade you’ll find a slightly larger 18lb hopper. During testing, I found that a full hopper lasted around 15 hours for me at 225, but would probably last a few longer if the ambient temperature was a little higher (35 degrees at the time of testing).

On the right side of the grill you’ll notice a curious lever and drawer underneath the cooking chamber. This is the brand new, and highly welcomed, ash dumping system. One twist of the spring-loaded handle and your firepot is dumped into the removable drawer, making for seriously easy cleanup. While this feature is much appreciated, the spring in the handle quit working the first time I got this grill over 500 degrees. I’ve seen more than a few complaints online about this exact issue. Luckily, the ash dump still functions perfectly fine as long as you manually return the handle to the closed position.

One of my favorite inclusions with the Bullseye Deluxe is the front shelf. Not many manufacturers these days are willing to slap a shelf on a grill from the factory. Rather, they offer it as an accessory available for purchase separately from the grill for extra money. Not so here.

The front shelf very much reminds me of the front shelf on my RT-1250, just a bunch smaller. It’s made out of the same stainless steel we all love, and folds out of the way when not in use. The folding mechanism feels very solid and locked-in when in the up position, and folds down smoothly and easily with the push of a lever underneath each side of the shelf.

The new RT-B380X Bullseye Deluxe features what looks to be the same PiD controller that lives on the RT-1250, with one less port for temperature probes. Sharp readers will notice an appendage coming from the unit which can only mean one thing; this Bullseye finally has WiFi! While most WiFi-enabled grills only run on the 2.4ghz band, the Bullseye Deluxe is capable of connections on the 5ghz band as well.

The controller also features a larger, nicer screen than the original Bullseye, as well as a 200-1000 degree temperature range (more on this later).

The cook chamber in the RT-B380X is largely the same as the original Bullseye, featuring the same size body and carbon steel heat deflector. One immediate difference to note is the 22″ cooking grate. Recteq provided an upgrade here as well, going with 304 stainless steel over the previous Bullseye’s porcelain coated steel version. Underneath that shiny grate and beefy deflector is the real meat and potatoes of this grill though; the all-new fire pot. 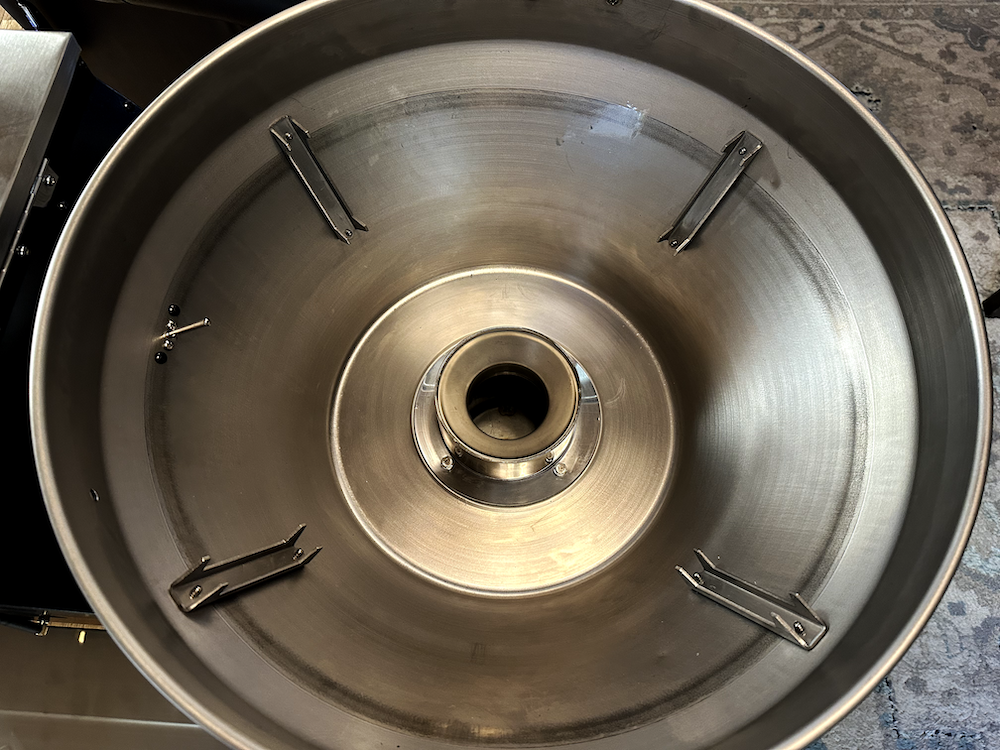 This is the main piece of the puzzle for how the new Bullseye Deluxe is capable of reaching 1000 degrees. I won’t pretend I understand any of the engineering that was done to achieve this, but the actual process is pretty cool. At a certain temperature, a process called gasification takes over. Overly-simply stated, instead of just the flame from the pellets providing heat, the gasses released by that fire also ignite above the pellets and burn at a much higher temperature, making that 1000 degree number achievable. This process is similar to how smokeless fire pits operate. Pretty cool, huh?

With the major differences out of the way, let’s have a chat about my experiences so far with this new Bullseye. One quick note: the recteq customer service team is the best in the business, hands down. Everything discussed below was handled quickly and easily with almost zero questions asked, exactly how it should be.

Listen, not every product that comes out of manufacturing is absolutely perfect. Some of them hit the market with solvable defects, and others are duds that require replacement. I did have to have my Bullseye Deluxe swapped out in the middle of testing, and let me tell you why.

My original unit arrived with a bad ceramic ignitor right out of the gate. While frustrating, recteq’s customer service team is absolutely incredible. With one quick, 60 second phone call, they had a new ignitor ready to ship out. No unnecessary questions, no phone robot runarounds, no long wait times. In my experience, that quick and painless turnaround for warranty issues is unmatched in this industry, and many others outside of the grill world.

After discussing this with recteq engineers, the decision was made to send this unit back for further testing on their part, and a brand new Bullseye Deluxe was provided in its place. Spoiler alert: it solved the problem.

While we’re not entirely sure what the issue was with the original grill, the new one completely solved my issues. One more painless encounter with the recteq team and that was it.

During testing, the new Bullseye Deluxe got within throwing distance of the 1000 degree claim, and I have no doubts that it would make it there on a nicer day. It’s cold here in Utah this time of year, and a 70 degree ambient temperature vs the 35 degrees this grill was tested in should absolutely make up the difference. Here’s the new temperature chart, and verification of my maximum temperature on an accurate ThermoWorks ThermaQ 2. 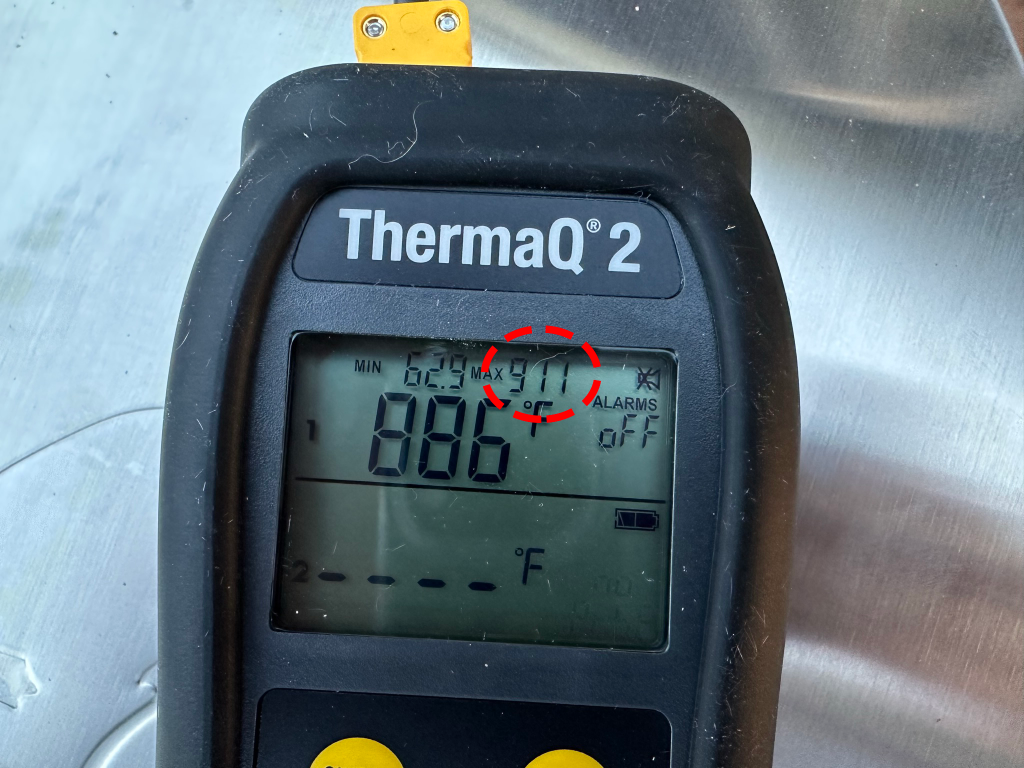 Cooking with the RT-B380X Bullseye Deluxe

With that mess out of the way, let’s talk about how capable this machine really is.

Keeping a lot of the DNA from the original unit, this one performs much the same albeit with lower and much higher temperature settings. It’ll smoke whatever you throw at it with a low setting all the way down at 200 degrees, and sear like a champ when set up high.

This prime rib eye steak was smoked for about an hour at 200 degrees, and then seared for about 30 seconds per side at a much greater 800 degrees. When you hear people say pellet grills can’t sear, it’s absolutely untrue for the Bullseye Deluxe.

The Bullseye Deluxe isn’t just a high heat machine like you might assume with that 1000 degree brag. Just like its older sibling, the Bullseye Deluxe can crank out some bangin’ low-and-slow cooks. I won’t go into much detail here as it’s largely the same as the previous Bullseye (review HERE), but I will drop these photos of a tri-tip cooked like a brisket. This tri-tip was cooked at 225 until probe tender and was absolutely delicious. 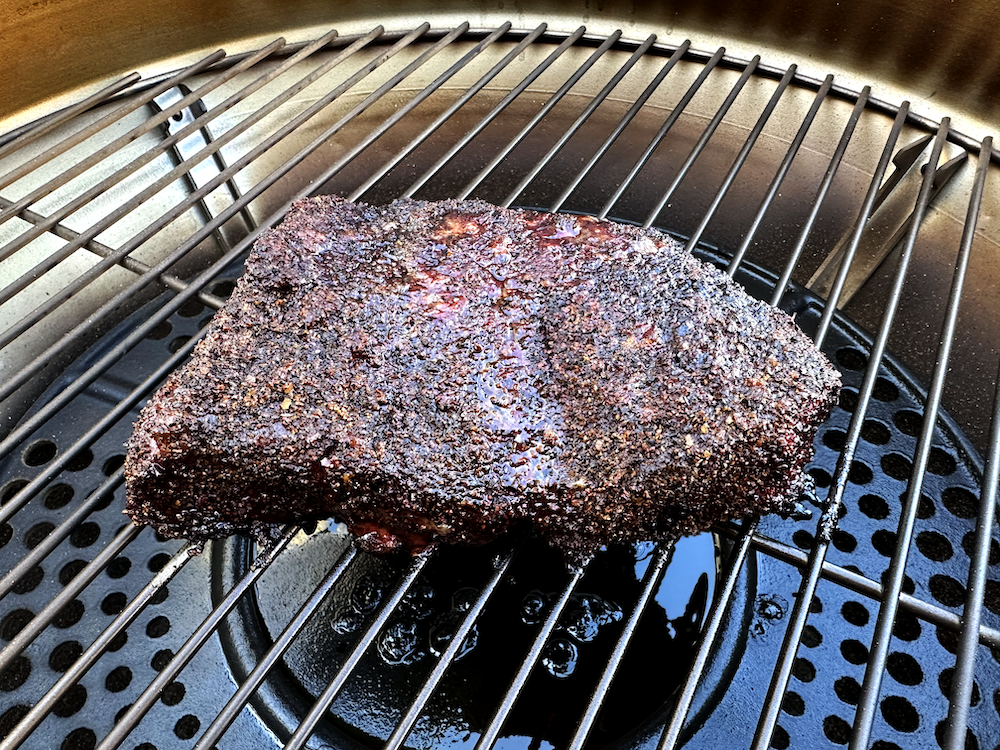 Here are some of our favorite things about the recteq RT-B380 Bullseye Deluxe:

Even though this is a great grill, there are a few things that could be improved with the recteq RT-B380 Bullseye Deluxe: 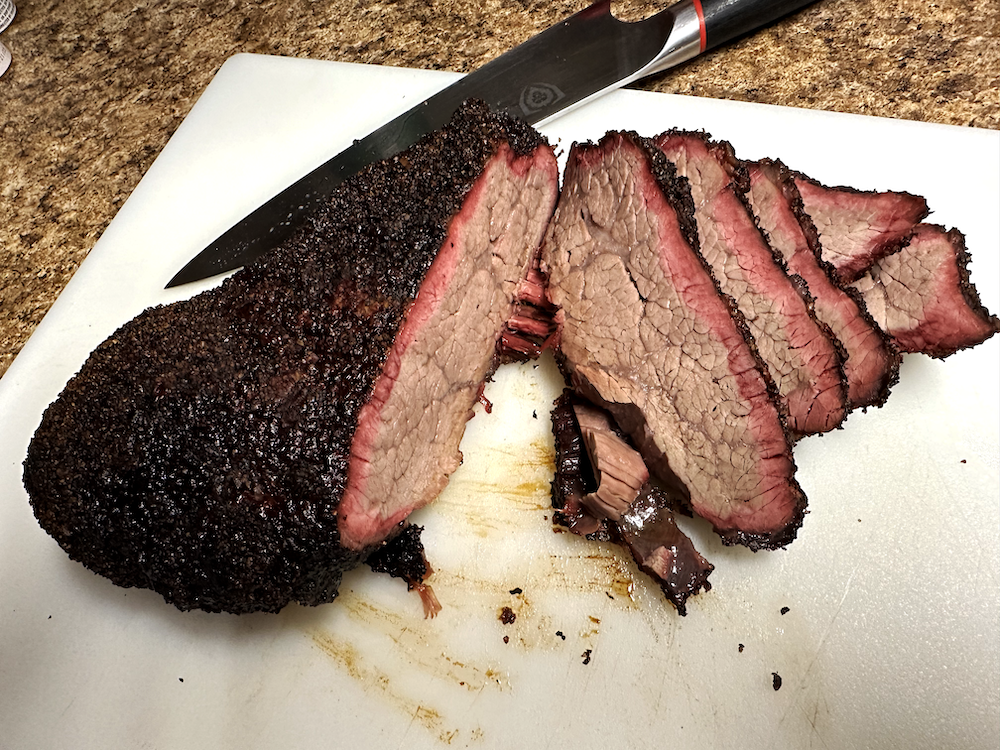 Recipes to try on the RT-B380 Bullseye Deluxe

Do you have the recteq RT-B380 Bullseye Deluxe in your back yard, or are you planning on buying one in the future? If so, I recommend trying these awesome recipes with your pellet grill.

Overall, any Bullseye you pick up from recteq is a solid choice. This pellet grill is nearly as versatile as a standard Weber Kettle and runs on more convenient fuel. The Bullseye Deluxe provides some premium quality of life features that you just can’t go wrong with and I’d recommend this grill to anyone looking for a pellet grill that can pretty much do it all; from low-and-slow smoking to searing hot. If you’re not one that needs the premium features or super hot temperatures though, save some money and go with the standard RT-B380 Bullseye. It provides a majority of the cooking experience at a much lower price point.