Backyard BBQ Masters! Today, we’re taking a look at the mighty recteq RT-1250. The RT-1250 is the big brother of the flagship RT-700 and boasts a number of improvements and added features. Do these improvements justify the cost? Can the grill really get as hot as recteq says it can? Let’s dig deep and find out.

recteq sent us this grill for testing and review purposes; however, all opinions are our own.

Please note: Hey Grill Hey is supported by its readers. We may earn an affiliate commission at no extra cost to you if you buy through a link on this page.

Recteq’s choice and execution when it comes to build materials remains high-end. The RT-1250, much like the RT-700, gets you stainless steel everywhere it matters! The cooking chamber, grates, firepot, drip pan, side shelf, folding front shelf, and even the smoke cap are all made of stainless, where others in the market usually choose cheaper powder coated steel instead. One major difference between the RT-700 and RT-1250 is the inclusion of a cast-iron heat deflector and faster auger motor. This deflector and motor are the main reasons the grill can achieve that jaw-dropping 700+ degrees Fahrenheit. 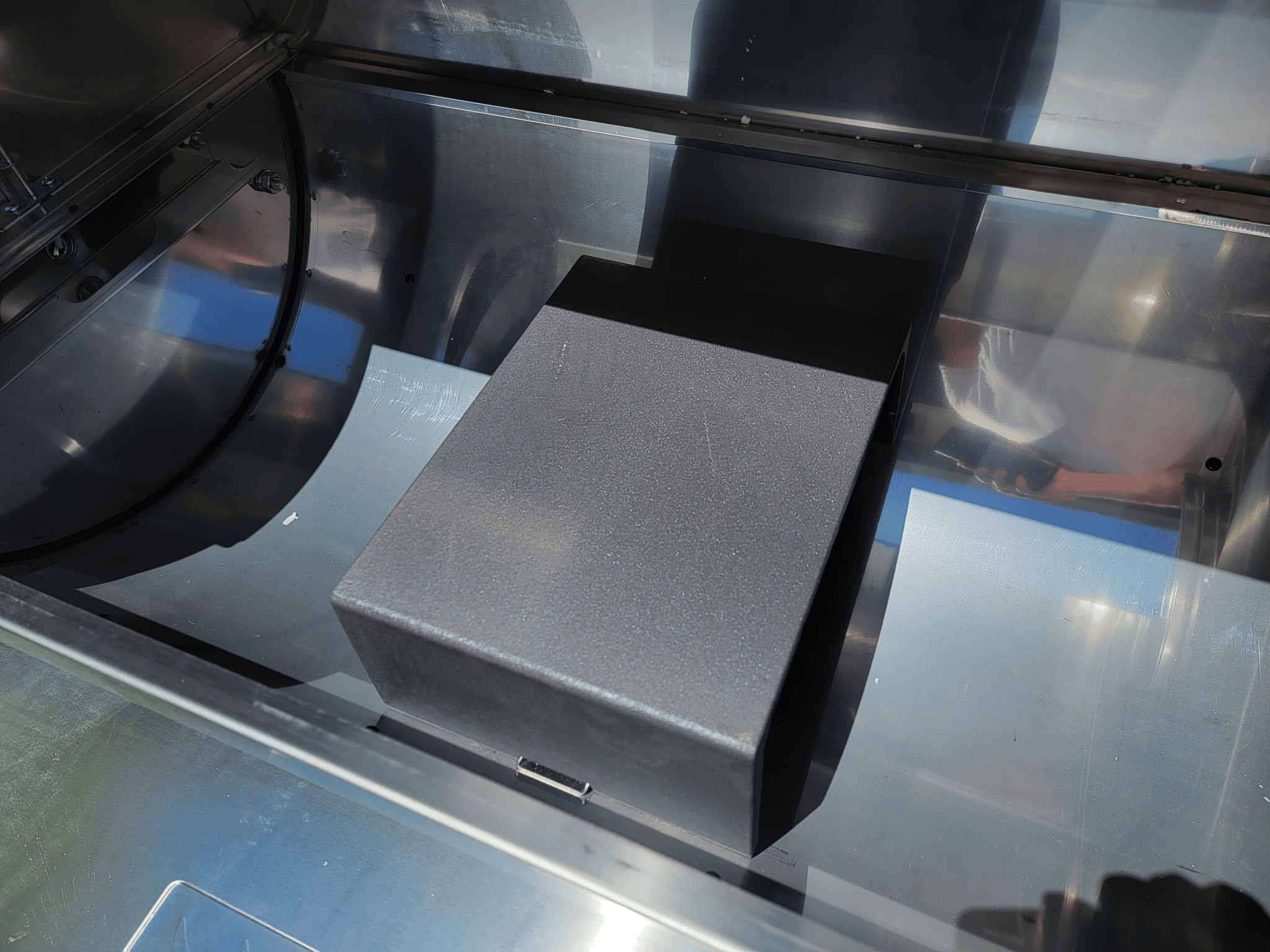 Eagle eyed reader, I’m sure you’ve noticed by now that the RT-1250 has many similarities to its little brother. In reality, the RT-1250 is the RT-700 with some killer upgrades and quality of life features thrown into the mix. Besides that cast iron deflector plate I’ve already touched on, I have a few more things to share. Right on the front recteq has included a massive folding shelf, something I think we should see included with grills and smokers much more often than it is. The shelf feels nice and sturdy and easily folds out of the way if you need to get a little personal with the cook chamber.

The controller is very much the same except for the 120v outlet on the back side, a slight redesign to the hooks that hold your tongs (did you click them three times for good luck?), and the inclusion of DUAL BAND Wi-Fi. Only have a 5ghz network? No problem! I’m a networking nerd when I’m not a grilling nerd and this inclusion makes me giddy. The reason manufacturers only have a 2.4ghz option for Wi-Fi is usually a cost vs necessity argument. Smart home devices, grills included, don’t use enough bandwidth to justify the extra cost of newer technology.

So why did recteq include it?

The most simple, and my favorite answer is this: it’s a quality of life feature! Some people out there, like me, only have a 5ghz Wi-Fi network. It’s incredibly convenient not to have to set up a 2.4ghz network just for grill testing or for my personal grills to connect to. While 2.4ghz is fine for most people right now, the longer it’s the only option on appliances like these, the more people will have issues down the road after a router upgrade. Other manufacturers need to take notes here. 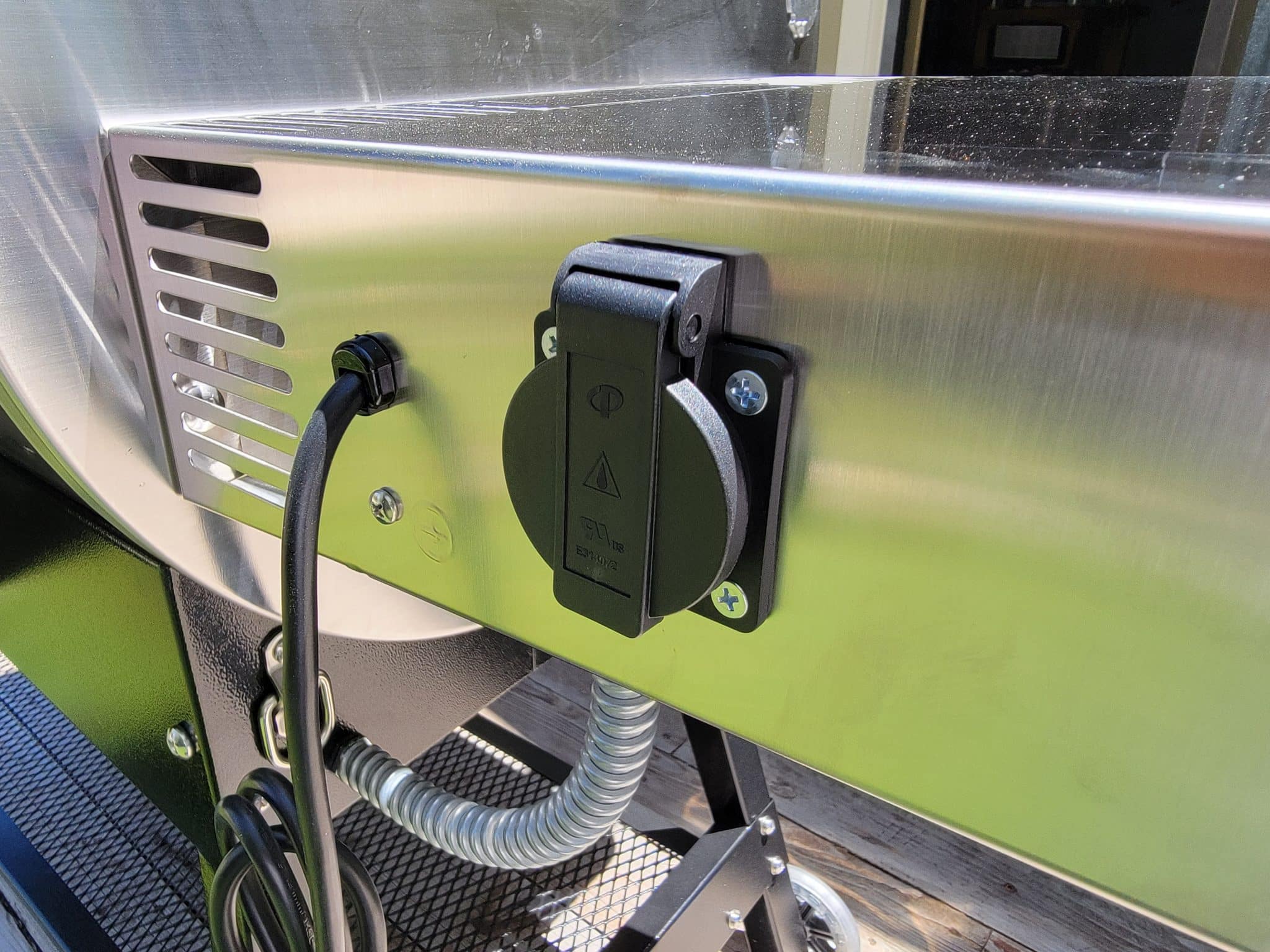 In this next photo, you’ll see the 4 included tie down points that are perfect if your grilling event requires a little mobility. I haven’t used these tie down points more than a couple of times, but man are they mega handy when you need them. Also shown in the photo is recteq’s solution to those pesky exposed controller wires. They’ve gone and stuck them through some conduit! No more coming out to grill just to find out man’s best friend thought colorful wiring would be a good snack! 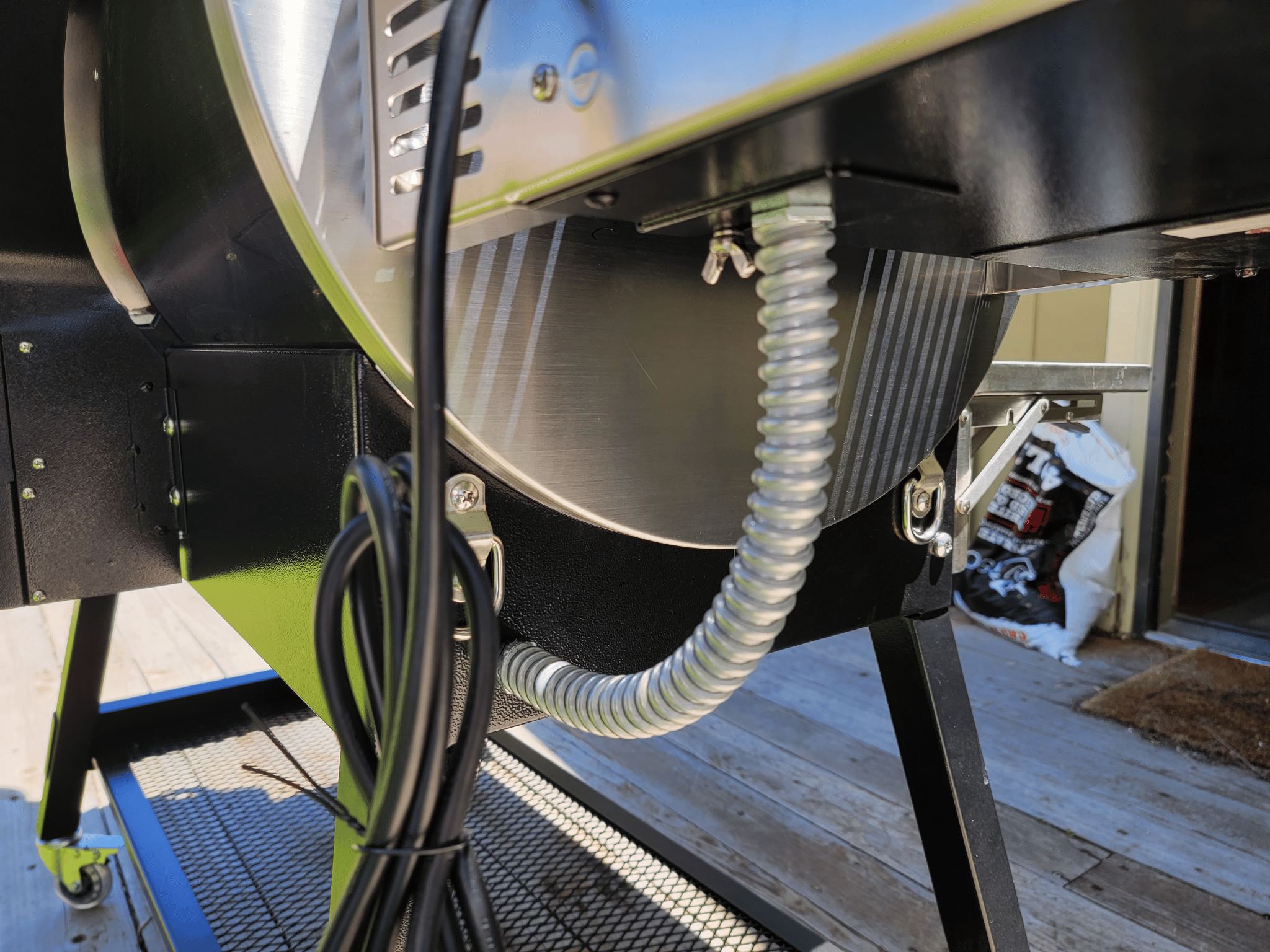 I’ve saved the most important addition, and slight bummer, for last! Recteq nearly DOUBLED the cooking space on the RT-1250 by adding a sliding upper grate! This isn’t just for easy removal. The rails support a decent amount of weight when the grate is partially pulled out, giving you easy access to those ribs up top that you need to mop. They’ve fitted the bottom grate with those same rails giving you complete access to your food down lower when the upper shelf is loaded up with food.

Now for the bummer. The inclusion of that upper grate means that there isn’t enough room for the interior light assembly that comes with the RT-700. This might make you feel a little sad inside, but I think it’s okay. While the light was super convenient, it was only that way for the first few cooks. It gets coated with grill grime pretty quickly and becomes nearly unusable. Slack on cleaning your grill light and you might as well not have one anyway. No biggie for me! 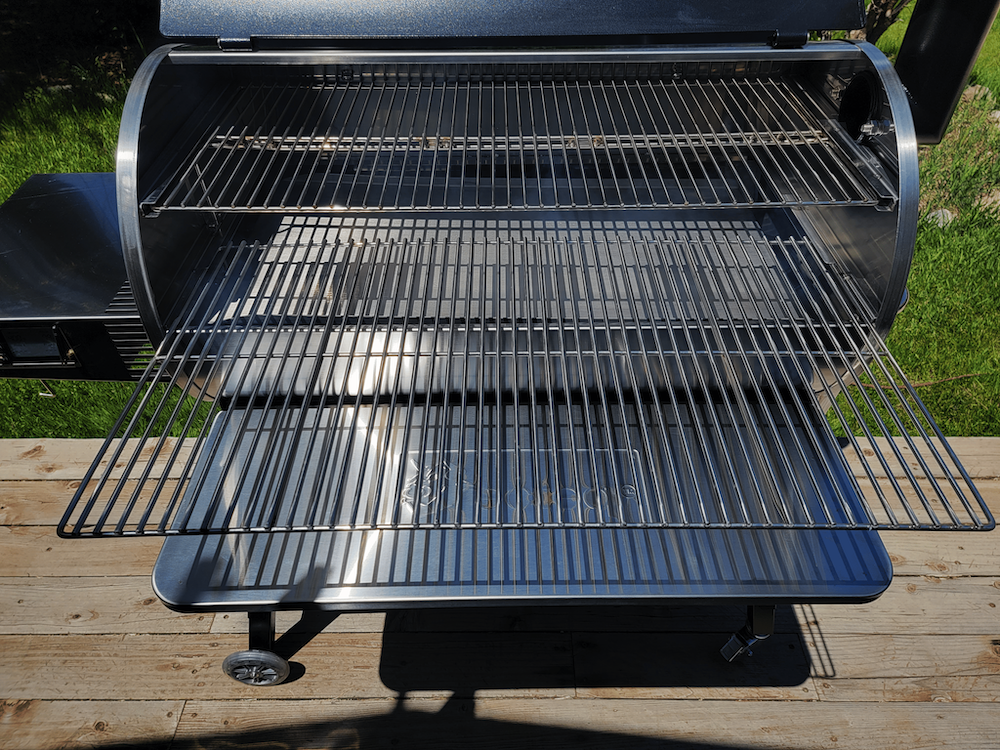 Cooking with the recteq RT-1250

Cooking on the RT-1250 is a Backyard BBQ Hero’s dream!

The RT-1250 features the same, absolutely gargantuan, pellet hopper that comes standard on the RT-700. Let me tell you that 40lb hopper is an absolute gift! I can get through many, many cooks before needing to top it off and I’ve had the hopper last over 43 hours straight when set to 225. If you’re a tired guy like I am, that extra peace of mind that your hopper can handle cooking all night long without a refill is a beautiful thing. The photo below is actually from an RT-700, but the RT-1250 has the exact same setup.

I’m loving tri-tips smoked like a brisket lately, and these recteq grills really crank them out. Check out the bark on this thing! The RT-1250 pulled this off in about 9 hours and I couldn’t be happier with the results. The bark was crisped up using the popular foil boat method and the roast was absolutely packed with flavor!

High temperature grilling and, yes, even searing are completely within the capabilities of the RT-1250. While recteq says the grill tops out at 700 degrees, I’ve found it’s capable of about 50 degrees hotter. The high temperature performance of this grill is absolutely incredible! These pork chops were cooked low and slow and then seared off to a perfect 145 degrees internal temperature!

While this high temperature was easy to achieve for this grill, it didn’t come without some slight damage. When I set the grill to hi the first time for testing, something between the body of the grill and the legs melted and started to ooze out of the front. I can’t tell if this is some bubbling powder coating or something else, but it is something to keep in mind. I’m not going to lie, having the grill that hot was slightly nerve-racking, but the RT-1250 handled it like a champ with the exception of the  melty goo. 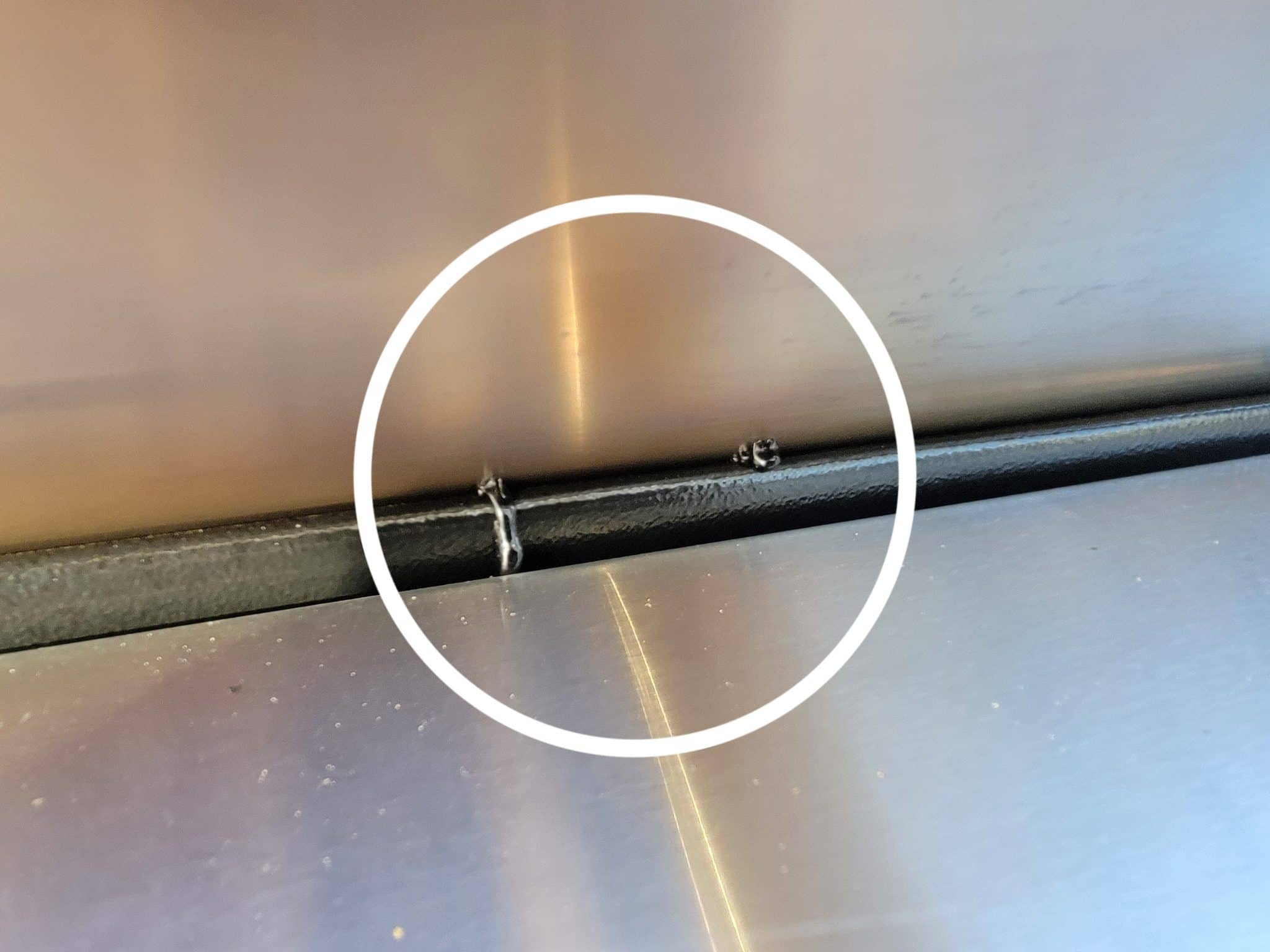 Here are some of our favorite things about the recteq RT-1250:

Even though this is a great grill, there are a few things that could be improved with the recteq RT-1250. Since it’s so similar to the RT-700, I feel the same improvements can be applied here.

Do you have the recteq RT-1250 in your back yard, or are you planning on buying one in the future? If so, I recommend trying these awesome recipes with your pellet grill.

Listen, I’ve had multiple pellet grills from recteq now and, compared to the competition, I’d pick them almost every time. This grill is perfect if you’re in the market for a grill similar to the RT-700 but would like a few extras for your money. The RT-1250 is no exception to recteq’s reputation for high build quality and is a great deal at the price point currently offered. You get that killer low and slow performance of the RT-700 combined with the ability to grill as hot as you’d ever need to, and I couldn’t ask for more. All of the included quality of life features make this grill an absolute dream and I’d recommend it first to anyone looking for grills near it’s price point!