This recipe for Bacon Wrapped Chicken Lollipops is a fun and delicious way to eat a drumstick. Juicy, perfectly tender chicken drumsticks are liberally seasoned with sweet rub, wrapped in bacon, and slow grilled for maximum flavor and perfect texture. 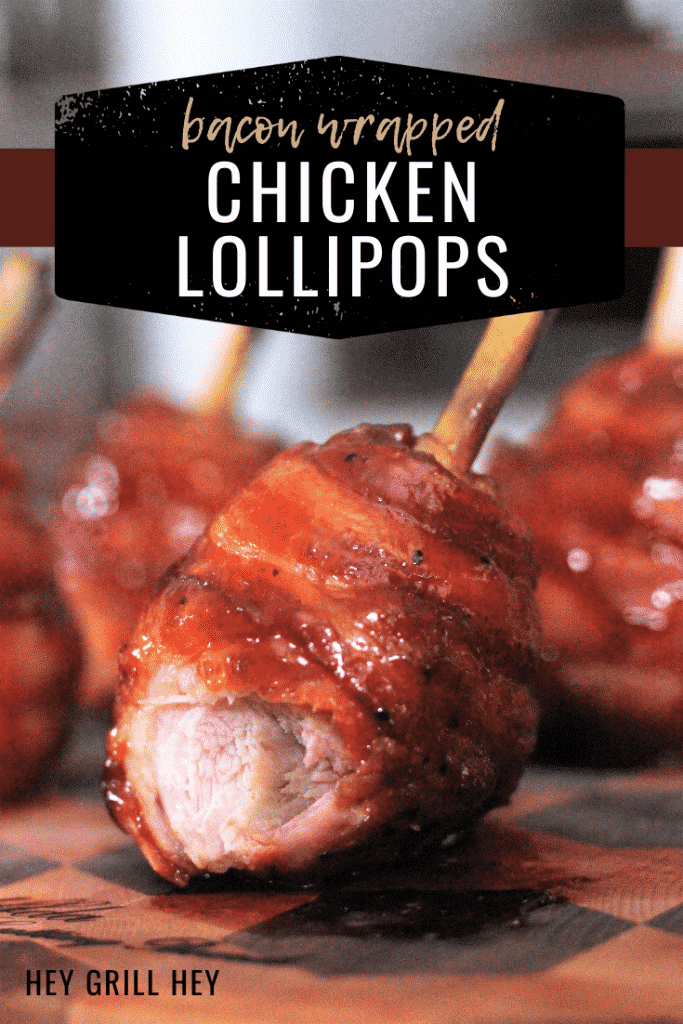 What are Chicken Lollipops?

Chicken lollipops are gaining popularity in the BBQ scene these days, and for good reason. Affordable chicken drumsticks are trimmed right at the bone joint and the chicken is shaped to form little handheld meat lollipops. My version includes a bacon wrap before hitting the grill for a low and slow smoke session.

To add that final touch that will really make these chicken lollipops feel like candy, I baste liberally with a super sweet and shiny BBQ glaze. You can use your favorite competition style BBQ sauce, but my absolute favorite sauce for these chicken lollipops is my homemade Whiskey Peach BBQ Sauce. It is just thin enough to thoroughly coat the chicken lollipops while letting that smoked bacon shine through. And bonus? If you’d rather have a bottle of this stuff pre-made and ready to go, we sell this BBQ sauce (and a few others!) in our shop, Patio Provisions. 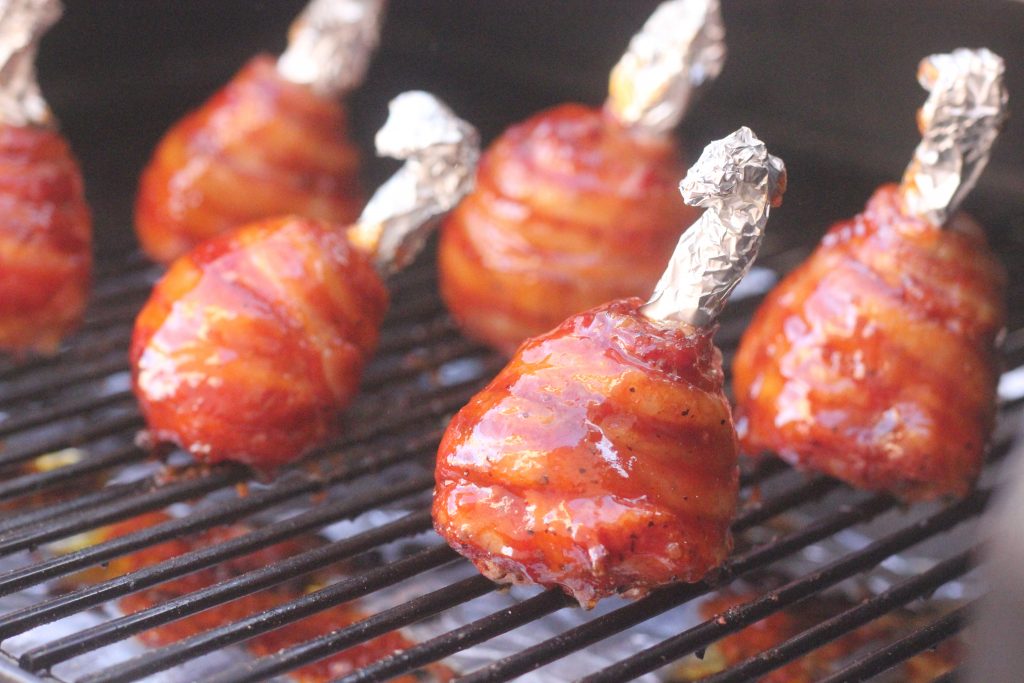 How to Make Chicken Lollipops

There’s a bit of a process to making these chicken lollipops, but they’ll be worth your effort when all is said and done.

There are two methods for getting your chicken lollipops ready for the grill. Some people use kitchen shears to snip through the skin and connective tissue right at the base of the meat and then remove the skin leaving the bone joint in tact. You can see exactly what that method looks like in my Honey Garlic Chicken Lollipops recipe.

My current favorite way to prepare them now is to use a sharp knife and cut clean through the bone right below the joint. From there you simply push the skin and meat down from the bone so the bone is exposed. Once your bones are exposed, you can wrap them in foil to prevent the bone from turning dark during the smoking process.

Step 2: Season and Wrap the Chicken Lollipop in Bacon

Now that your drumstick is in lollipop form, season the chicken on all sides with some sweet rub. You can make it yourself using my recipe for the Best Sweet Rub, or you can use my Signature Sweet Rub shipped directly to you from Patio Provisions.

Next up, wrap the seasoned chicken lollipop in bacon. I recommend using regular bacon for this recipe, nothing too thick or thin. As you wrap your bacon, make sure to tuck the ends of the bacon pieces into the bacon above it. This prevents the ends from coming loose during the smoking process. If you aren’t confident in your bacon end tucking abilities, go ahead and use a toothpick to secure the bacon.

Once your lollipops are seasoned and wrapped in bacon, it’s time to cook! These taste incredible cooked in a smoker. If you don’t have a smoker, you can cook these on your grill or oven. Grill them on your gas or charcoal grill over indirect heat (no flame underneath) or in your oven preheated to the same temperature. Just make sure the grease has a place to go so your lollipops aren’t sitting in that liquid and you’re not getting constant flare-ups from the fat dripping down. Cook the chicken lollipops at 225 degrees F and try apple or hickory wood in the smoker.

Use an internal thermometer to check the temperature of your drumsticks. When the internal temperature reaches 135 degrees F, increase the heat in your grill to 375 degrees F to finish rendering and crisping the bacon. Once the internal temperature of your chicken lollipop reaches 175 degrees F, it’s time to glaze! You can use whatever BBQ sauce you like, but shoot for something sweet and on the thinner side. They’re called lollipops after all, so they should look nice and shiny! My absolute favorite sauce for this is my Whiskey Peach BBQ Sauce. It’s just sweet and shiny enough to look beautiful on these lollipops.

Normally with chicken you are aiming for an internal temperature of 165 degrees, but with drumsticks I like to grill to 185 degrees F. After you glaze the lollipops, close the lid and allow the chicken to continue cooking. The meat will still be incredibly juicy and the higher temperature will break down some of the connective tissue in the drumstick so you don’t end up with any stringy or chewy pieces.

If you know me well, you know I love to wrap all the foods in bacon. It’s hard not to love a good bacon wrapped chicken or pork recipe. Double meaty goodness and flavor, I say! Check out some of my favorite bacon wrapped recipes here on Hey Grill Hey:

I could eat a Bacon Wrapped Chicken Lollipop for breakfast, lunch, and dinner and I'd be happy! Juicy, perfectly tender chicken drumsticks are liberally seasoned with a homemade BBQ rub, wrapped in bacon, and slow grilled for maximum flavor and the best texture I've ever had in a drumstick.
4.2 from 5 votes
Prep Time : 20 mins
Cook Time : 2 hrs
Total Time : 2 hrs 20 mins
Servings : 3 people
Calories : 536kcal
Print Recipe Save to Pinterest

**This post was originally published in January 2018. We recently updated it with more information and helpful tips. The recipe remains the same.