How to Cook Stuffed Pork Chops

Stuffed pork chops can be difficult to cook correctly without drying out because often times people will stuff their pork chops with cold filling. They then have to keep the meat cooking much longer than it should to ensure the filling reaches the correct temperature. This recipe calls for the filling to be made and stuffed into the pork chop while still warm to help shorten the overall cooking time and create a juicier stuffed pork chop.

The best way to guarantee you have a perfectly cooked pork chop is to use an instant read thermometer. Pork is perfectly cooked through, juicy, and safe to eat at 145 degrees F. Get yourself a good instant read thermometer to avoid over or under cooking your stuffed pork chops. I recommend this $29 digital Thermopop from Thermoworks or the $99 Thermapen MK4 if you’re really serious.

If you don’t want to fire up your grill for these stuffed pork chops, you can absolutely bake them in the oven or even cook on the stove top in a cast iron skillet (my next favorite approach)! For the oven, simply preheat to 375 degrees F. Follow the instructions for the filling and stuffing and then arrange your pork chops in a 9×13 baking dish that has been lightly coated in non stick spray. Bake for approximately 20 minutes, flipping the pork chops over in the pan halfway through, or until the internal temperature reaches 145 degrees F.

To cook in a skillet on the stove top, follow the instructions for the filling and stuffing. Preheat a 12 inch cast iron skillet over medium high heat. Drizzle about 1 Tablespoon of olive oil into the pan and swirl around. Place the chops into the pan and cook for 2-3 minutes per side to get a nice golden brown crust. Cover the pan with a lid and reduce the heat to low. Cook for an additional 6-8 minutes or until the internal temperature of the pork chop reaches 145 degrees F. 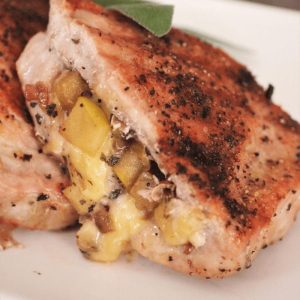