This recipe for marinated London broil has a simple marinade that is ridiculously full of flavor. The cilantro gremolata adds the perfect touch to the recipe, and the whole thing comes together for a fantastic meal. 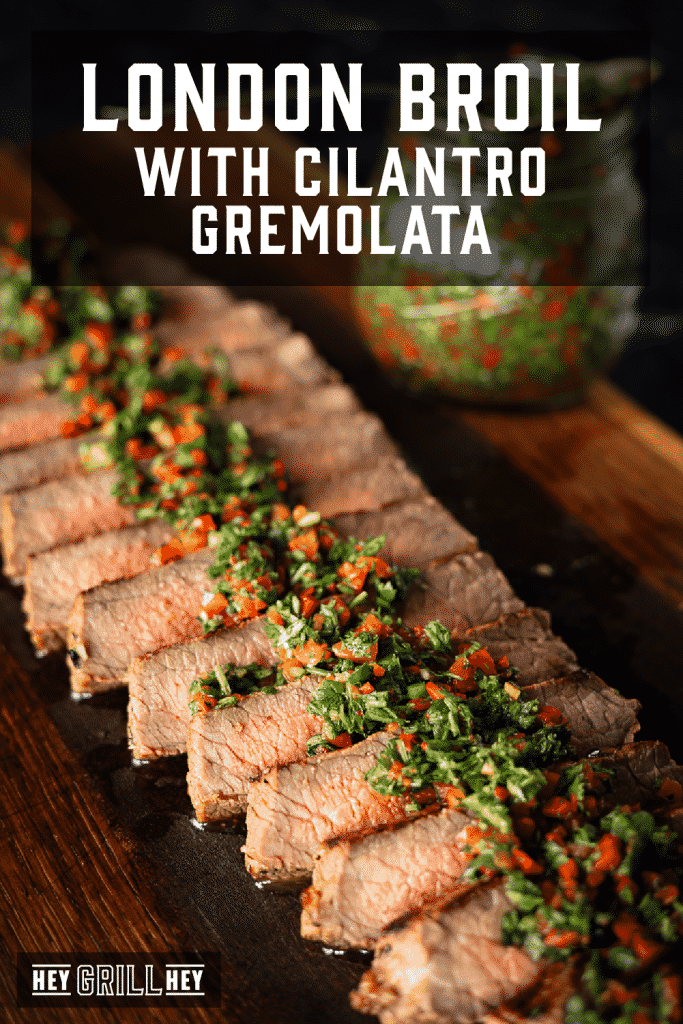 Every once in a while, I talk myself into stepping away from my BBQ game to get some needed R&R. I take off on vacation with grandiose plans of taking long naps and laying by the pool. That lasts about a day, then my crazy mind gets the best of me. Next thing I know I’m daydreaming of food, flavors, and ingredients, and before I know It, I’m at the grocery store buying stuff for this marinated London broil.

This recipe was born on a girl’s trip (bless my friends who accept me for who I am and who willingly offer themselves up as taste testers). Everybody threw out suggestions for ingredients, a few wanted to help, and everybody wanted to eat. The result was a ridiculously delicious dinner that everyone loved.

Oh, and a little side note: London Broil isn’t actually a cut of meat, it is a style of cooking. London broil is made by marinating beef then broiling or grilling it and serving it sliced thin against the grain. The cuts we most commonly see labeled as “London Broil” in America are a top round steak or roast. 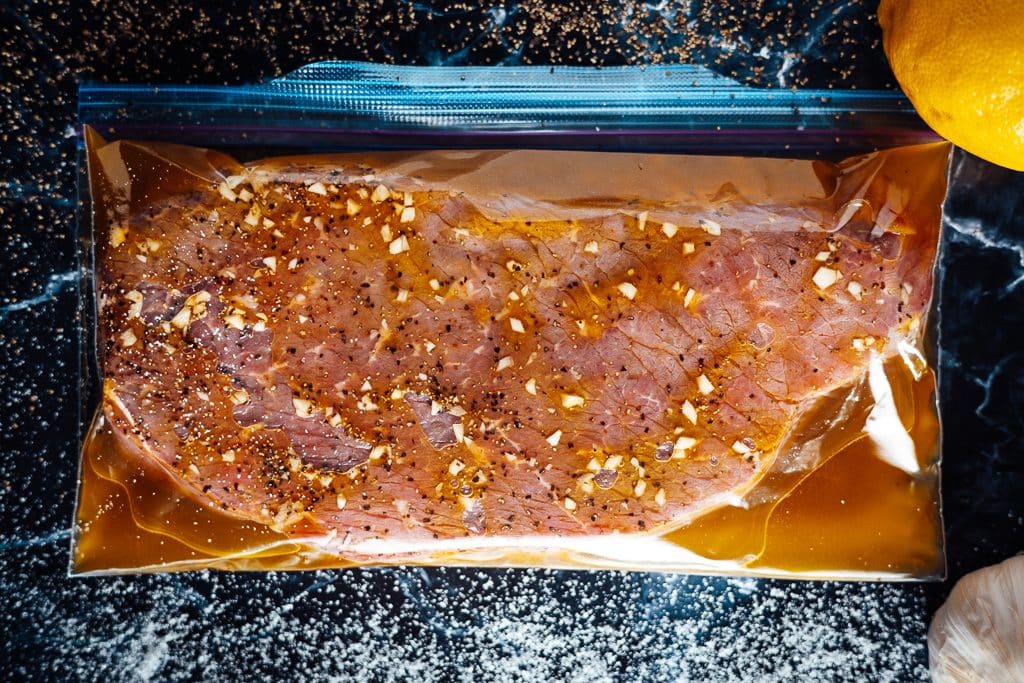 This London broil is bright and flavorful, but not too heavy, thanks in part to the awesome marinade. The citrus marinade adds an incredibly fresh flavor and light.

Here’s what you’ll need for this marinade:

This marinade would also be killer on chicken or shrimp, it’s really flavorful and versatile. No matter what you use this marinade on, just make sure you don’t marinate your meat for more than an hour or two. The acid from the citrus can actually start to cook your meat and the texture is less than pleasant. 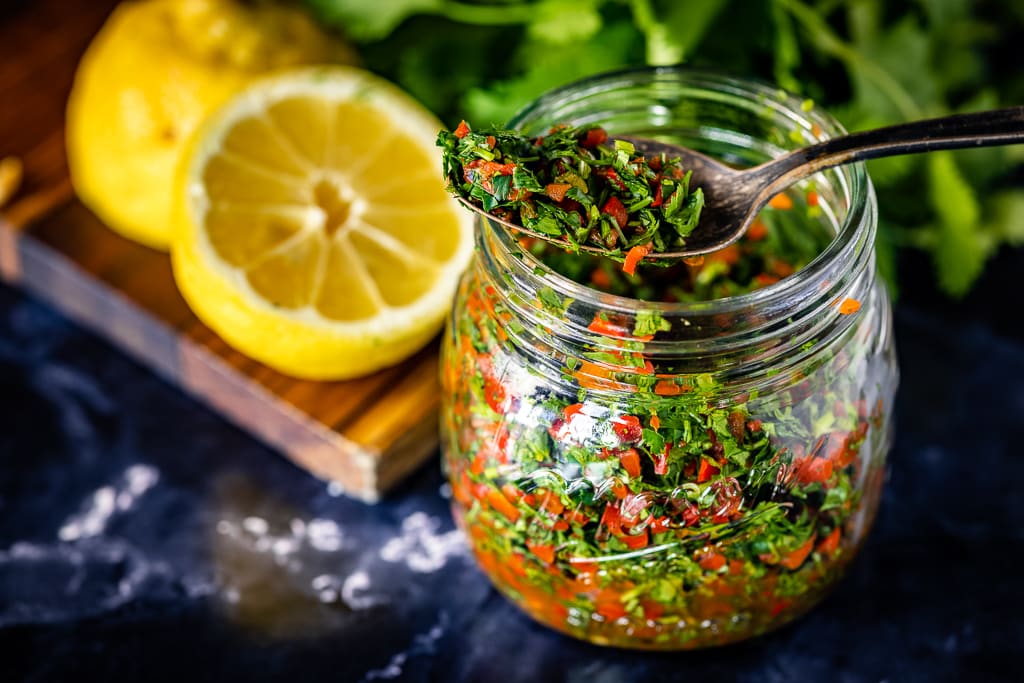 How to Cook London Broil

London broil is extremely easy to cook. I prefer to cook mine on a nice, hot gas grill until medium rare (Between 130-140 degrees F). You can serve the sliced London broil as an entree by itself, as it stands alone beautifully. Cook up some veggies and rolls, and you’ve got a whole meal ready to enjoy.

If you’re looking for other ways to enjoy this meat, London broil is absolutely amazing on a salad, in a steak sandwich, or with steak and eggs the next morning. I never hesitate to buy the meat in bulk, double the recipe and save the leftovers for some amazing meals through the following week! You definitely get a lot of tasty meals by cooking extra and using the meat in various ways. 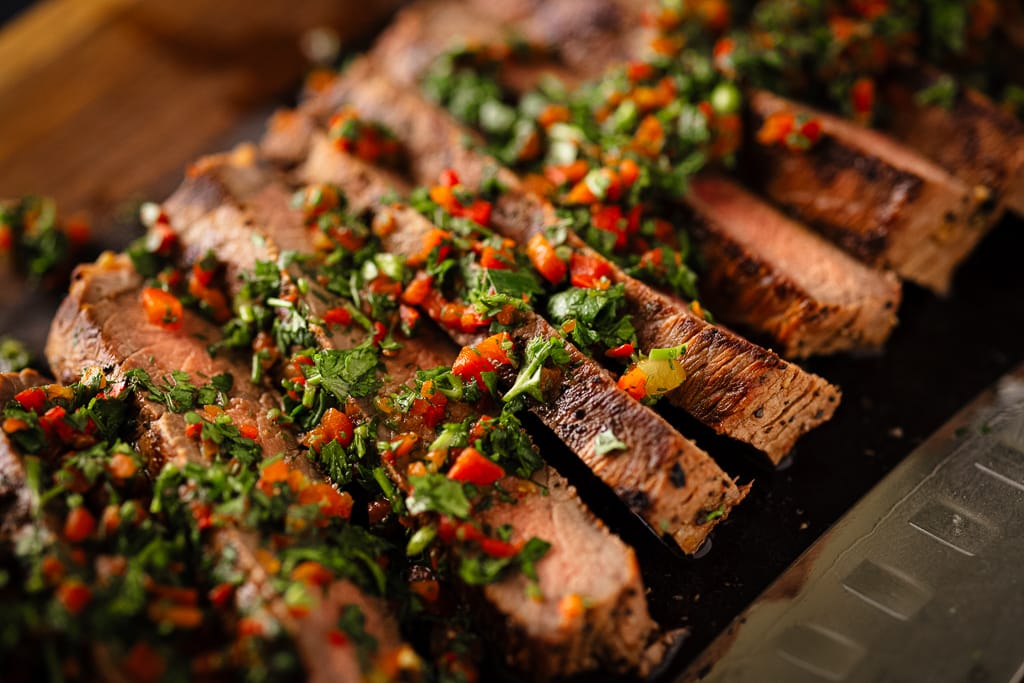 Once the steak is grilled to perfection, it is topped with a bright, herbaceous gremolata (think of it as a savory condiment). Lemon, cilantro, and peppers come together in this wildly flavorful topping that livens up the rich steak. Cilantro gremolata is also awesome on grilled veggies or in a grilled cheese sandwich! Bonus? There are very few ingredients, and it is wildly easy to make.

Most recipes for gremolata call for green chilis, but I forgot to put those on my shopping list, so I improvised a bit with this recipe. Bell peppers were readily available in my fridge, and these added a great flavor.

Before you toss the steak on the grill, roast the bell pepper (yellow, red, or orange, any will do) over high heat until the skin blackens and blisters. Next, place the roasted bell pepper in a zip-top bag until it is cool enough to handle. Peel off the charred skin, cut out the seeds and stem, and then dice.

Once you have delicious roasted peppers diced, mix them up with fresh cilantro, lemon zest, and lemon juice. That’s it!

This gremolata has a ton of synergy happening. Each part on its own is delicious, but when all of the ingredients are finely chopped and mixed together, it becomes something otherworldly. Spoon it on top of the citrus-marinated London broil, and you’ve got a match made in food heaven.

Looking for more delicious marinated steaks? Check out a few of our favorites from Hey Grill Hey below!

This London broil makes for an amazing spring or summer meal. It’s easy to make and ready in a jiff, so you can enjoy a delicious meal any time of the week!

Did you make this recipe? If so, I’d love to hear about it! Make sure to leave me a comment below! 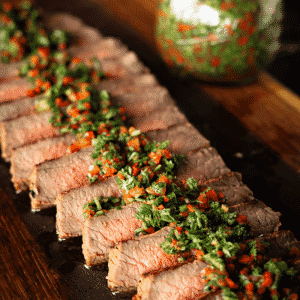 This recipe for marinated London broil has a simple marinade that is ridiculously full of flavor. The cilantro gremolata adds the perfect touch to the recipe, and the whole thing comes together for a fantastic meal.
Prep Time : 15 mins
Cook Time : 15 mins
Marinade Time : 1 hr
Total Time : 1 hr 30 mins
Servings : 4 people
Calories : 527kcal
Print Recipe Save to Pinterest

**This post was originally published in June 2015. We recently updated it with more information and helpful tips. The recipe remains the same. 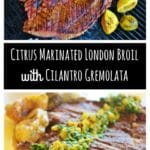 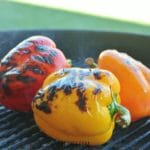 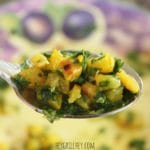 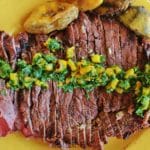 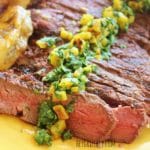