The Carolinas are known for their amazing and tangy BBQ, and this post has rounded up 4 delicious Carolina BBQ recipes that you can make in your own backyard. From sauces to pulled pork, with some vinegar coleslaw on the side, you’ll have a BBQ feast straight out of the south! 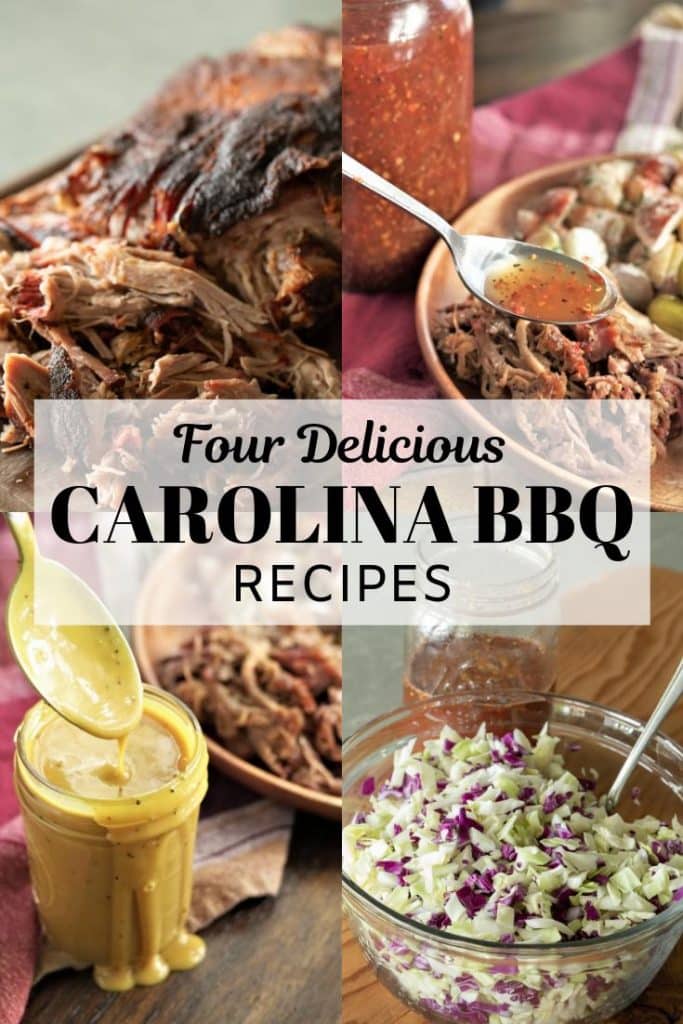 Carolina pulled pork is one of those classic American BBQ styles that everybody needs to try at least once! Rich, savory smoked pork shoulder is slathered with a thin, vinegar based sauce. The two combine beautifully to bring a little bite to all that melt in your mouth meat. 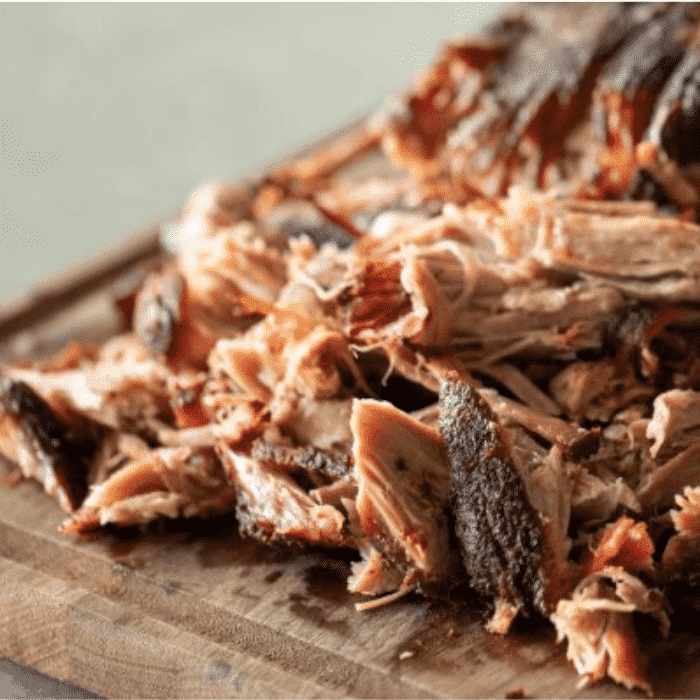 Vinegar BBQ sauce is a staple in North Carolina. It is often considered the mother of American BBQ sauce, and its origins date back generations when meat was soaked with acidic sauce while it cooked over an open flame. The sauce is made by combining a few, basic ingredients together and using it to baste or mop over pork to keep it moist while it cooks.

Unlike other popular sauces, this Carolina Vinegar BBQ Sauce is thin and has an acidic and spicy bite to it that sets it apart from the more well-known BBQ sauces that are thick and sweet.

It’s also extremely easy to make! Keep in mind these three tips, and you end up with a fantastic vinegar BBQ sauce: 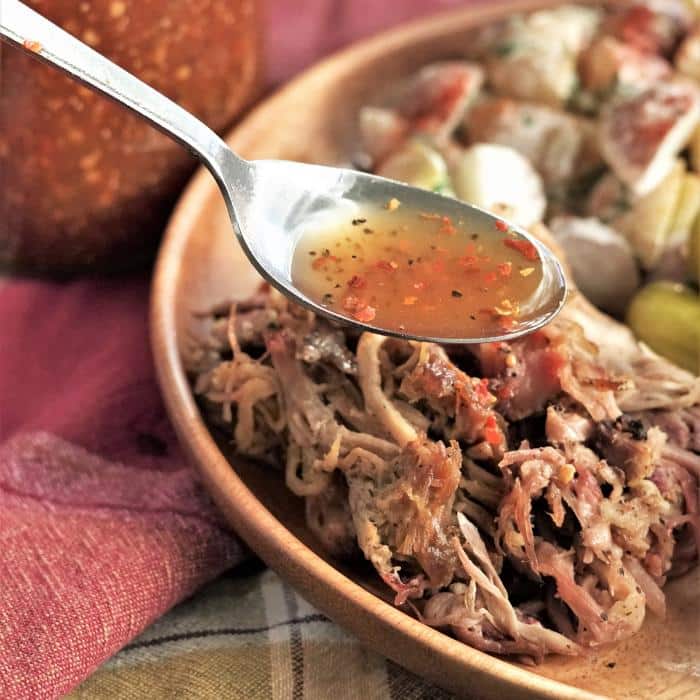 Carolina style mustard BBQ sauce is a sauce made with mustard, vinegar, sweetener, and spices. It originated in South Carolina, and it is a golden sauce perfect for all your grilled and smoked meats. Carolina-style indicates its made with vinegar instead of the ketchup and molasses-based sauces popular in the mid and southwest.

The combo of the ingredients in my recipe for Carolina Mustard BBQ Sauce make this sauce the perfect BBQ sauce for pork, chicken, beef and more. It’s sweet, tangy, sour, and can be adjusted to have just a bit of heat as well. If stored in a wide mouth mason jar, this sauce will keep in the refrigerator for up to 2 weeks. 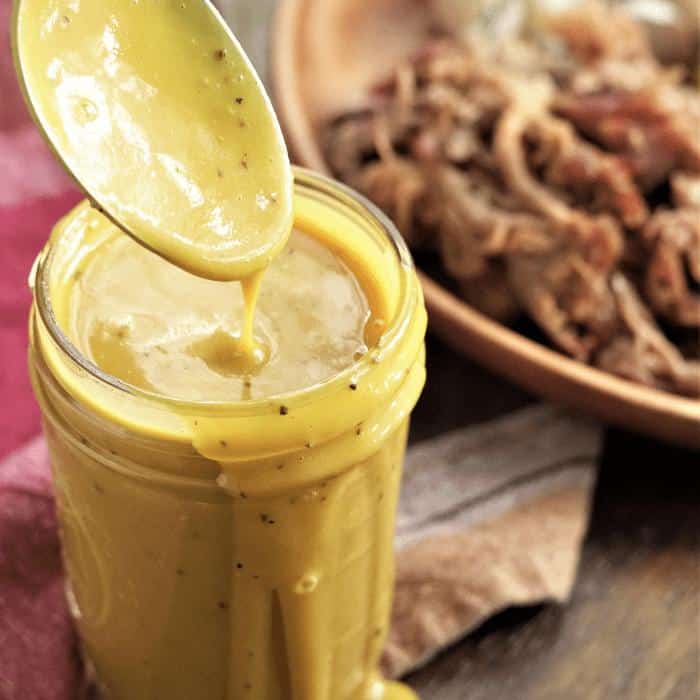 Coleslaw with a vinegar base is popular in the Carolinas, and for good reason! This coleslaw tastes amazing with smoked pulled pork! When you combine rich, smoked pork shoulder with this crunchy, tangy, chopped slaw, you’re practically in BBQ heaven.

The dressing in this Vinegar Coleslaw also does double duty. It not only dresses the cabbage and makes for a tangy coleslaw, with a few tweaks it also makes for the most delicious Carolina vinegar BBQ sauce. I wouldn’t dream of eating pulled pork without a side of this coleslaw. 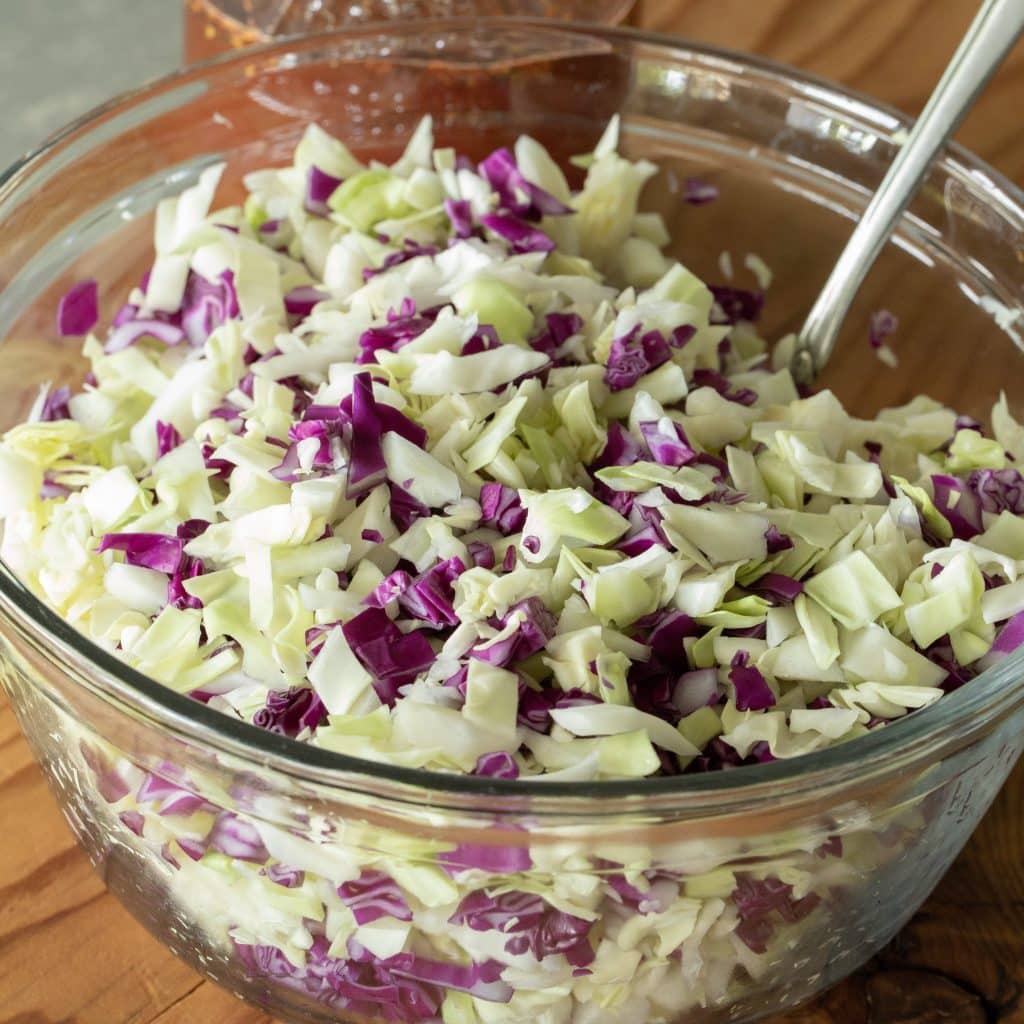 Watch the video below and I’ll show you step-by-step how I make these delicious Carolina BBQ recipes at home. I’m all about helping you make the best backyard BBQ of your life, so check out more of my smoking and grilling recipe videos on YouTube, Instagram, or our Facebook Page. Follow along and let’s make awesome food together!

Interested in more rubs and sauces from Hey Grill Hey? Head on over to Patio Provisions to pick up a 3-pack of Hey Grill Hey signature sauces today!